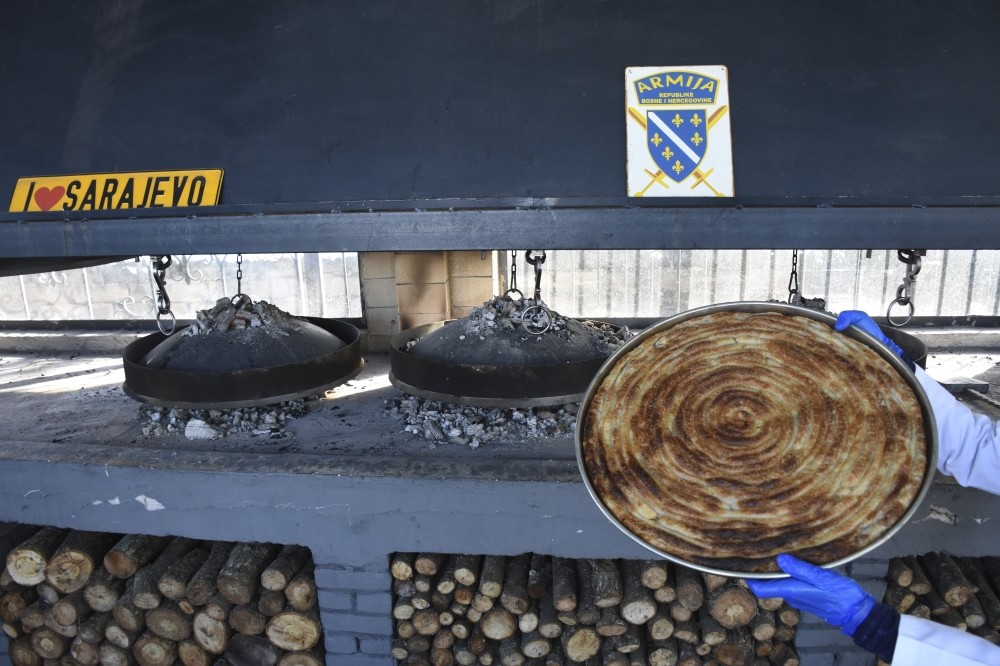 Atlı Konak, located in the rural Kazancı neighborhood in Bursa's Kestel district, which became home to Bosnian immigrants during the Russo-Turkish War of 1877-78 once again has the smells of Bosnian pita wafting through the air.

The structure, which was built for tethering and for cooking Bosnian pita in ovens once, was put into operation again by Muzaffer Çilek, the Bosnia-Herzegovina Honorary Consul to Bursa. At the facility, Bosnian women spread the dough without using rollers. Prepared with ground meat, cheese, spinach and mash fillings and fixed on trays, Bosnian pita is baked on the cinders of wood fires with galvanize covertures on it.

With an aim to transfer Bosnian culture to the following generations, they flavor the facility with pitas, which are prepared in accordance with hundreds of years of traditions.

Atlı Konak's director Burak Yalım spoke to Anadolu Agency and said that he had a chance to get to closely know Bosnian culture when he went to Bosnia-Herzegovina for his postgraduate education in 2011.

Yalım mentioned their attempts to keep Bosnian values alive when he came back to Turkey and stated that they decided to promote iron plate Bosnian pita with the support of the Honorary Consul Muzaffer Çilek and his son Ahmet Hakan Çilek.

Stating that Atlı Konak, which translates to "the mansion with horses," in the Kazancı neighborhood is the best place to do it, Yalım said, "People tethered their horses to the building and supported it with ovens to cook iron plate Bosnian pitas in the very first years of Bosnian migration. To be able to make this history alive, we initiated this activity and wanted to show people the beauty of Bosnian culture. We want to promote and popularize this Bosnian beauty. Here, we try to offer the atmosphere of Bosnia-Herzegovina with Bosnian music playing in the background."

Around 50 trays of pitas in a week

Stating that they bake 50 trays of pitas on average in a week, Yalım said, "Although we started service about three months ago, our facility draws a great deal of attention. The pitas are baked by Bosnian women. While we work with a team of six persons on week days, the number goes up to 15 on the weekends. We chose the part-time workers from the Bosnian students at Bursa Uludağ University."

Huriye Akşeker, 56, one of the bakers at the facility, noted that they spread the dough on tables without using rollers and that it takes half an hour to bake the pitas. "I work here just to revive my culture. Normally, I am a housewife. We have relatives who still live in Bosnia. We still see each other. We transfer the pita making skills that we learnt from our mothers to our children."

'Tastes the same as the ones in Bosnia'

Ayşen Kılıç, a visitor from İnegöl district, says, "I went to Bosnia-Herzegovina. This pita tastes the same as the ones in Bosnia. I could not see any difference. What is more, the ones baked here are a bit more delicious. I thank the baker women here." Fatma Kılıç said that she visits the mansion often to eat pita. Stating that she is also a Bosnian, Kılıç added, "It makes me happy to find something from my own culture, roots here."