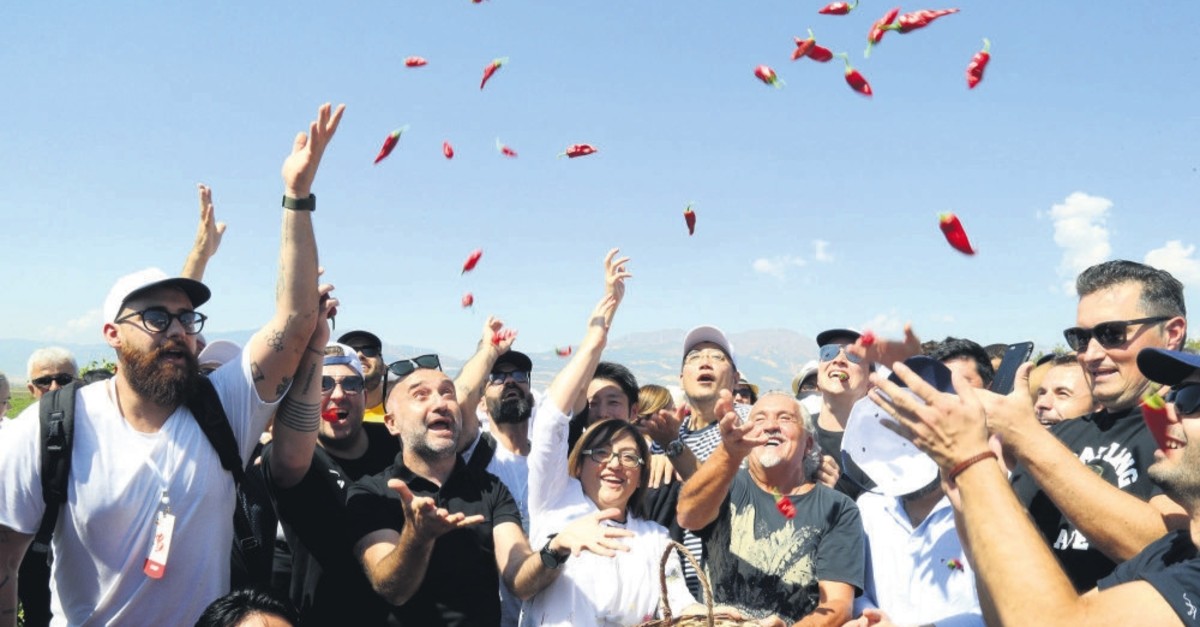 The festival attendees can visit red pepper fields and pick peppers themselves.
by Miraç Tapan Sep 14, 2019 12:04 am

Hailed as the "Food Capital of the World," Turkey's southeastern province of Gaziantep is currently hosting the second edition of its international gastronomy festival, GastroAntep, and if you're looking for a quick, delicious and spontaneous getaway, be sure to visit this beautiful city before the festival ends on Sunday night.

The four-day festivities, which kicked off on Thursday, will continue until the end of the weekend. The festival includes chefs, members of the food and restaurant sector, influencers and participants from 40 different countries around the world.

Kicked off with a parade and live concerts, the festival is taking place in the heart of the city. The festival area encompasses a huge space where you can find food stalls with local delights as well as handicrafts and entertainment for adults and children. Workshops by Michelin-starred chefs are also taking place throughout each day so you can learn how to recreate thousands of years of Gaziantep cuisine at home. During panel sessions, influencers, world-renowned chefs and gastronomy experts will discuss the details of Gaziantep's dishes and how these incredible foods can be adapted to everyone's palate. The festival is also hosting a series of competitions where Turkish and international chefs battle to cook the best meal using the ingredients from Gaziantep cuisine.

Throughout the festival, participants also have the chance to see how the delicious ingredients of the region's dishes are grown. Accompanied by guides, you can pay a quick visit to pistachio and red pepper fields and pick them yourself. Gaziantep is a city with an astonishingly wealthy historical and cultural background. And while you are here, you can stop by the impressive Zeugma Museum, where world-famous Roman mosaics excavated from the ancient city of Zeugma are on display. The museum is home to a great number of mosaics, representing different artistic periods in the region as well as the beautiful but haunting "Gypsy Girl" mosaic. Gaziantep was included in the UNESCO Creative Cities Network thanks to its 8,000-year-old cuisine. Famous Gaziantep cuisine is a fine synthesis of Anatolian, Mesopotamian and Mediterranean dishes. In fact, the region is a microcosm of Anatolia as a whole, meaning there really is a perfect dish for everyone.

Although kebab and baklava are what come to mind when Gaziantep cuisine is mentioned, GastroAntep will surely teach you a thing or two about this beautiful city and its delicious food.