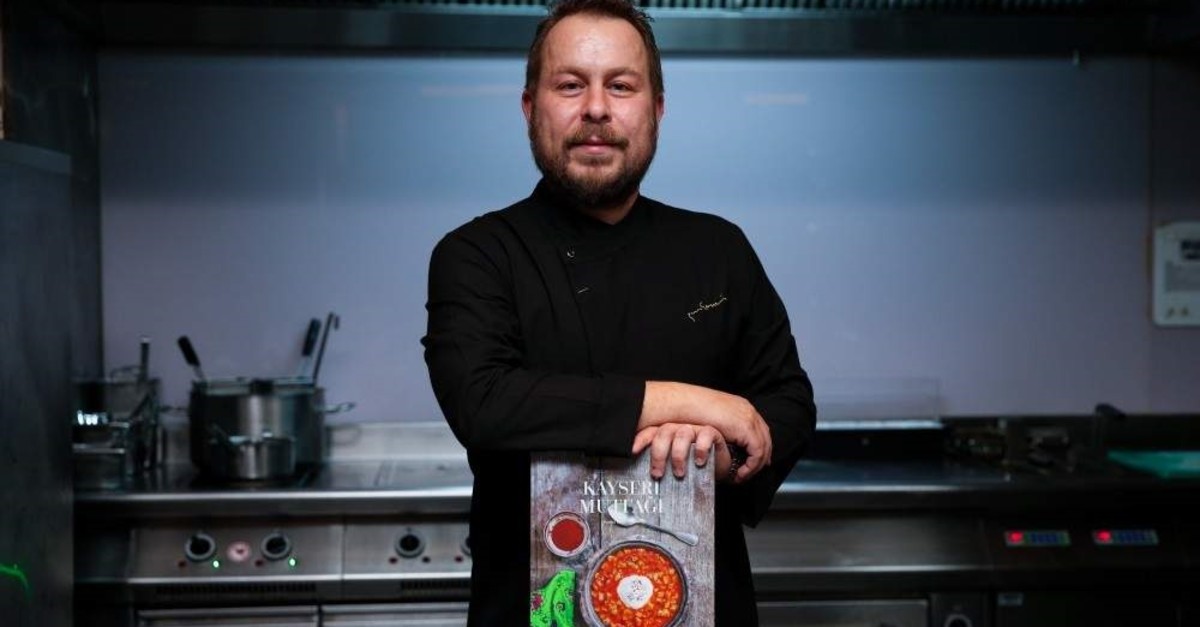 Chef Yunus Emre Akkor poses with the book that earned him a ,Gourmand Cook Book Award., (AA Photo)
by Anadolu Agency Dec 02, 2019 12:20 pm
Turkish Chef Yunus Emre Akkor has won an award at one of the world's most prestigious cookbook competitions known as the ‘"Oscar awards" for gastronomic literature.
Every year, the Gourmand World Cookbook Awards are held in Madrid, and thousands of books from several countries compete. Akkor won the award in the "Local Cuisine" category with his book "Kayseri Cuisine from the Past to the Future" and will represent Turkey in the grand final to be held in China in May 2020.
Speaking to Anadolu Agency (AA), Akkor said it took two years to complete the book, which contains over 100 recipes of traditional dishes from Kayseri in central Turkey. The book, which was published by Kayseri municipality in October, tracks the cuisine culture of Kayseri dating back to around 4000 B.C. and the Hittites. Akkor notes that traces of the culture continue to live in today’s Kayseri cuisine. Kayseri cuisine is among the world’s oldest local cuisines still being practiced. "The characteristics and history of Kayseri cuisine are included in the book from A to Z. When you say Kayseri, at first manti (ravioli) comes to mind. Today, we eat manti for lunch and dinner, but manti used to be consumed in the morning for breakfast. It is even said that Fatih Sultan Mehmet ate manti for breakfast for a month after he conquered Istanbul. As people in Kayseri claim, 40 manti pieces fitting on a (wooden) spoon is correct. The important thing is that it fits 40 pieces after cooking since the dough becomes larger after cooking," said Akkor. He noted that he dedicated his book to his grandmothers who inspired him and plans to write another book on Circassian cuisine to show gratitude to his grandmothers. He added that he grew up with both Circassian and Kayseri cuisine. He noted that Turkish and Ottoman cuisine is well-liked worldwide and the number of chefs who value tradition is increasing day by day. "We need to give importance to our old culinary culture. Maintaining the local cuisine is actually protecting the health of our children," he added. Akkor received an award at the 2012 Gourmand World Cook Book Awards for his book "Ottoman Seafood Cuisine" written with his older sister, Zennup Pinar Çakmakçı.
Last Update: Dec 20, 2019 2:04 am
RELATED TOPICS