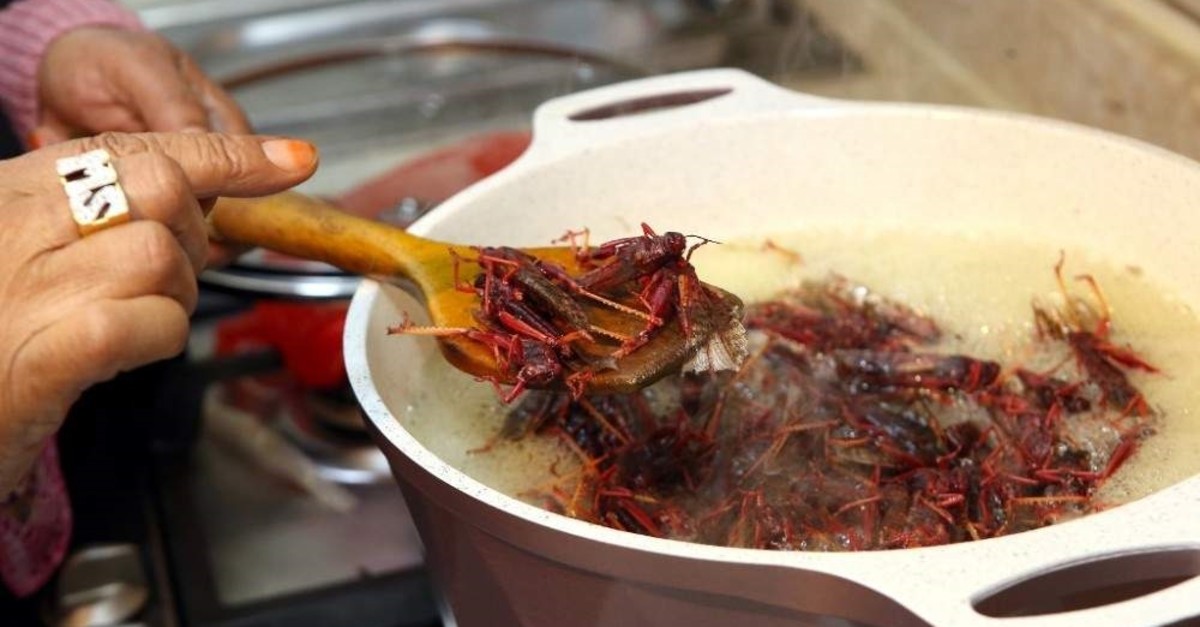 Some people like them baked, others prefer them dried. Locusts are surprisingly nutritious and considered a delicacy by many in Kuwait but not everyone is enamored by the crunchy culinary offering.

"I love their flavor. It's one of my memories of childhood and reminds me of my grandparents and my father," enthuses Moudi al-Miftah, a 64-year-old journalist who writes a weekly newspaper column in the country. Miftah awaits winter every year to stock up on locusts, which she cooks herself, with a preference for crispiness.

In her kitchen, she tipped a bag of the insects into boiling stock where they quickly turned red, filling her kitchen with an aroma similar to stewing mutton. After simmering for half an hour, the locusts are ready to eat, but they can be baked for added crunch or dried so they can be enjoyed year-round.

But most of Miftah's loved ones stopped eating the bugs long ago.

Locust consumption is dwindling across Kuwaiti society, particularly among the younger generation, many of whom are disgusted by the prospect. Ali Saad, a man in his 20s who was shopping for groceries, was visibly repulsed by the idea of snacking on insects. "I've never thought of eating locusts," he said. "Why would I eat an insect when we have all kinds of red and white meats?"

'The flesh is very tasty'

Locusts are consumed in many parts of the world and are a staple of some cuisines. Experts say they are an excellent, energy-efficient source of protein. In Kuwait, they retain a sturdy fan base among older citizens. The first shipments, imported from Saudi Arabia, arrive in markets in January, transported in distinctive red bags weighing 250 grams.

They are stocked alongside white desert truffles, another delicacy sought by Kuwaitis in winter at the Al-Rai market nestled in an industrial area in the northwest of Kuwait City.

Abou Mohammed, 63, is originally from Ahvaz in Iran and normally sells fish at the market. But when the season arrives, he becomes a locust and truffle salesman. "The locusts are caught during winter nights (when they are not flying), and we import them from Saudi Arabia," he said. He described the bugs as "like shrimp" and posited that "the flesh is very tasty – especially the females, which are full of eggs." The larger females are known as "el-Mekn" in the Kuwaiti dialect, while the smaller males are called "Asfour."

Abou Mohammed says he sells almost a dozen bags a day at between 3 and 5 Kuwaiti dinars ($8 and $16) each. "I sell some 500 bags throughout the season, which is from January to April," he said.

'Stockpiling for next year'

Authorities have sought in vain to ban the consumption of locusts over fears they could be contaminated. Locusts can rapidly multiply and form swarms that damage crops, forcing some countries to tackle them with pesticides.

Adel Tariji put his stock of two black sacks beside his vehicle and prospective clients pulled up alongside to examine his produce and haggle over prices. Tariji, who has sold locusts since he was 18, said that despite reticence from some, he had seen glimmers of interest from health-conscious younger buyers.

They are more willing to pay higher prices because they are convinced of the benefits of eating "all-natural" products, he said. "Some people are even stockpiling for next year out of fear that there will be no locusts next season."