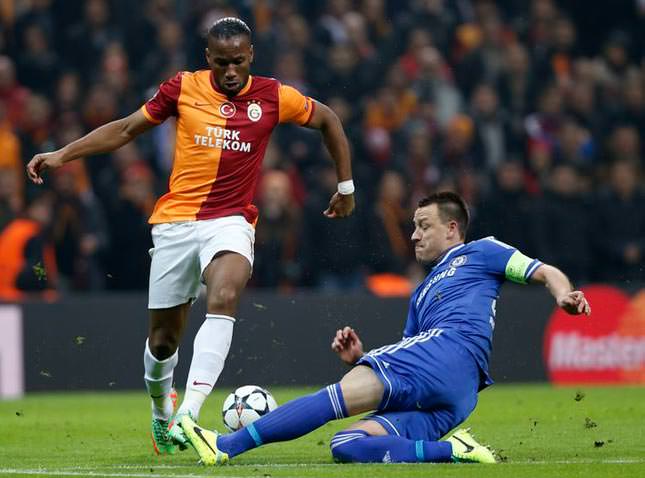 Chelsea left Istanbul with a goal to their name as the game ended in a 1-1 draw, unnerving Galatasaray fans following Chelsea's dishonorable gameplay

Though Wednesday's night game was full of excitement at both ends of the pitch, Galatasaray fans were left with a feeling that Chelsea Manager Jose Mourinho and his side cheated them out of what should have been their home game win in a packed to capacity Türk Telekom Arena.

Hearts dropped in Istanbul when Fernando Torres gave Chelsea the lead in the 9th minute of the first leg of the round of 16 standoff, though the Galatasaray squad's defensive mishap that led to the goal did not dishearten the Lion's squad. The first half saw Galatasaray resist a Chelsea offence pushing forth to obtain their second goal, until a 42nd minute quick start attack gave Galatasaray an equalizing goal through a difficult finish from Burak Yılmaz.

Chelsea Captain John Terry's dishonorable action would cause the ref to call the Yellow and Reds to retake the throw in which had brought them what should have been their goal. Terry acted against the "Fair Play" policy which tournament organizers UEFA so avidly pursue when he decided to throw a second ball onto the pitch to prevent Galatasaray's attack. Terry received a yellow card for the action and Galatasaray filed a complaint with UEFA, but the player's lack of remorse and the blatant intent of his action tarnished what little reputation he may still of had left following his previous scandals.

The goal that they denied brought a new energized Galatasaray onto the field in the second half. Mourinho, seeing his side drop from form following the resumption of the match reverted back to his old ways and did what he does best when under pressure, try to bring the tempo of the game to a standstill.
The young, agile, durable and high endurance Chelsea squad suddenly turned sluggish, injury prone and aggressive in what quickly became an academy award deserving display.

Chelsea keeper Peter Czech was booked after he continuously took atrocious amounts of time to resume play from goal kicks. German national Andre Schurrle and Brazilian Ramires also both received yellow cards following multiple displays of aggression and acting as the Portuguese manager kept his eyes on the game clock. Coming on for Schurrle, John Obi Mikel also produced a supporting performance that must have given Mourinho a chuckle. Mourinho received a warning from the match official following what was obviously explicit instruction from the Portuguese manager yielding to the Blues' particular behavior.

Chelsea's unexplainable sudden fragility came as no surprise for this same phenomena was seen in highest stage of European football the year Mourinho went onto win the tournament with his Inter Milan side, most notably in their confrontation with Barcelona at the Camp Nou. Though the London side put on quite the memorable display in their attempts to win the referees pity and bring the game to a halt, their fate was inevitable as wave after wave of Galatasaray attacks brought them an equalizer in the 65th minute when Aurelien Chedjou slipped behind the Chelsea defense to tap in Wesley Sneijder's curving cross.

The question that begs to be asked is why a Mourinho, who was so confident about victory before the match and who praised Chelsea's "performance" on the pitch, resorted to the same tactics he normally saves when facing a side that on paper out performs his own.
Has the eccentric manager decided that he can't count on luck and forward playing defenders to win his battles as they have been over the past few weeks in the English Premier league? If Chelsea played in this abhorrent manner when leading in an away game, how can we expect them to play in the second leg at Stamford Bridge next month? While he is determined to obtain ill-gained advantages through his past methods, will the selfdubbed "special one" once again ruin European football for the masses by fielding a full defensive squad? Only the second leg will tell as a cheated Galatasaray will travel to the opposite end of the continent to seek the result Mourinho and his dishonorable skipper tore from their grasp.