11 arrested in clash between PSG and Leverkusen fans 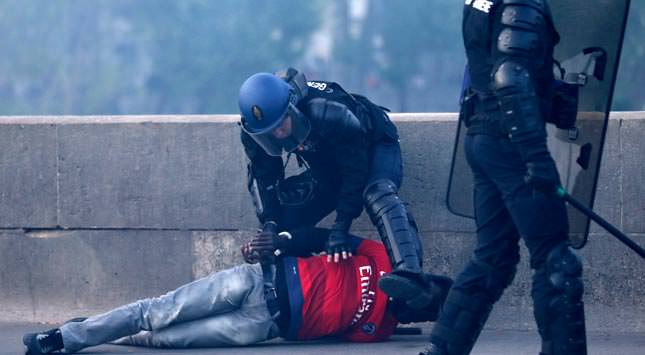 by Associated Press Mar 14, 2014 12:00 am
PARIS – Eleven people were arrested after a fight between fans of Paris Saint-Germain and Bayer Leverkusen before their teams' Champions League game on Wednesday.

About 40 fans of each side met in Paris' historic center in a "short but violent altercation" outside Odeon metro station that left several people with minor injuries, PSG's director of security Jean-Philippe d'Halliville told The Associated Press by telephone. He added that fans of another German club, Kickers Offenbach, reinforced the Leverkusen contingent.

D'Halliville said the groups charged at each other twice, and that the clash was "probably pre-arranged" - with the presence of fans from another club lending credence to that. He added that nine of those arrested were from the German contingent and two were PSG fans.
PSG has tried hard to eradicate a longstanding hooligan problem. Two PSG supporters died in separate incidents outside Parc des Princes stadium in 2006 and 2010.

PSG's group match at Anderlecht earlier this season was considered high-risk and around 150 known PSG hooligans were rounded up by police before that game in Brussels. In the same area of Paris in December, 2008 PSG and FC Twente hooligans fought a pitched battle in a side-street close to the landmark St. Michel fountain before their UEFA Cup match, as Christmas shoppers scattered for cover.Hundreds continued their scrapping outside the stadium later that night. There were violent clashes between PSG and Dinamo Zagreb fans in the Bastille area of Paris the night before PSG's home game last season, despite the French Interior Ministry issuing a decree banning Zagreb fans from attending the match amid hooliganism concerns.

PSG had not provided club travel for its supporters in Zagreb two weeks prior to that after consulting with UEFA. Last season's league title celebrations turned into a fiasco as fights between fans and riot police left more than 30 people injured and led to several arrests.