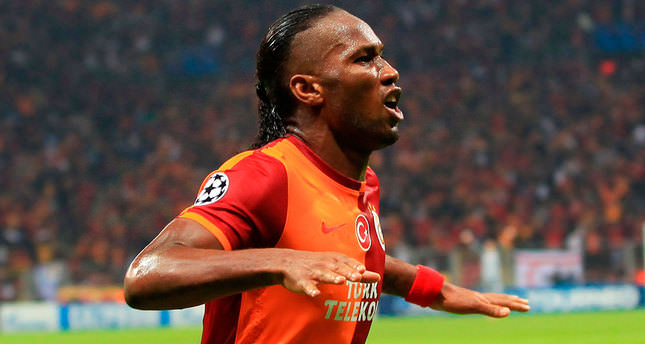 Following the 1-1 draw in Istanbul, the Yellow and Reds now look to beat Chelsea in London to advance to the quarter finals of the Champions League

ISTANBUL – The long awaited second leg of Galatasaray's clash with Chelsea is finally upon us. The first leg, ending in a draw, left Galatasaray fans feeling cheated as Burak Yılmaz's first half equalizer was thrown out because Chelsea captain John Terr y had introduced a second ball onto the pitch and the Lions had to fight their way to a second half equalizer. Now swarms of Galatasaray fans will travel to London in the hopes that their team can overcome the English giants.

Roberto Mancini's men will take to the field at nearly full strength as only subsitiutes Emre Çolak and Aydın Yılmaz will be out with Injury, while star goalkeeper Fernando Muslera has opted to play in the match even though an injury last Friday left him with eight stitches in his knee. The same can be said for Chelsea, as Marci van Ginkel is their only player out with injury and Jose Mourinho was unlikely to offer the youngster a spot in an important matchup anyway.

Chelsea have been the more in form side as of late with a record of three wins one draw and a loss in their last five fixtures, the monumental 4-0 win against Tottenham being one of them. However the Londoners will take to the field following a morale crushing 1-0 defeat against Aston Villa which saw Willian, Ramires and the Portuguese manager sent off. Galatasaray have been facing a spell of inconsistency as they recorded two wins and three draws in their last five fixtures.

Before the match much has been said, as former Chelsea and now Galatasaray star striker Didier Drogba boasted that "Stamford Bridge is my house. I could score there even with my eyes closed." Galatasaray fans will pray that his words have truth behind them but fears of the Ivory Coast striker's happiness emerged following the tantrum he threw following his inexplicable late stage substitution against Karabükspor. The Elephants star is more than capable of menacing any defense on his day, but his mood more often than not gets reflected in the quality of his performances.

Galatasaray manager Roberto Mancini also took his stab at playing these mind games as he told La Repubblica, "I don't think Mourinho wants to have friends, or maybe that's just the way he likes to appear." He also told the Italian newspaper that he was in part responsible for building the Inter Milan side Mourinho won the Champions League with.

With Mourinho at the helm and Chelsea with the away goal advantage, it will be safe to say that the home side will fall back defensively and resort to the manager's notorious time wasting tactics as we saw them do in the first leg in Istanbul. Mancini and Galatasaray will have to play a high tempo attacking game if they want to stand any chance of advancing to the next round. However the Lions bust be careful to not let the Blues break on a counter attack as the entirety of the home side's offence is composed of players known for their blistering place and on the ball ability.

Galatasaray will need to play a strong attacking game in which they do not make the passing and defensive mistakes Turkish clubs have become associated with.

Regardless of the outcome the clash between these two clubs from opposite ends of the continent should make for an entertaining performance, that is if Jose Mourinho doesn't once again resort to the full blown defensive tactics we have become accustomed to.