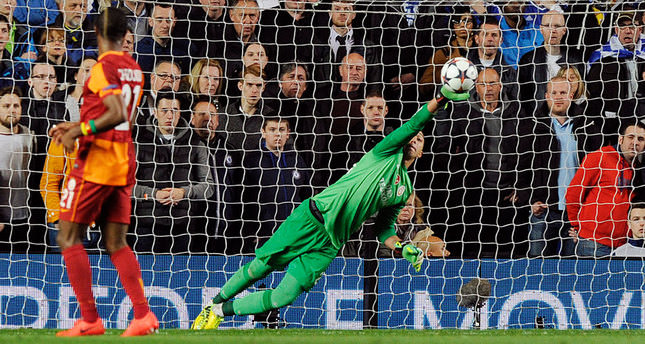 On Monday, Galatasaray travelled to London believing that they could capitalize on a 1-1 draw in the first leg to proceed to the quarter finals for the second time in a row

ISTANBUL – Over the past few years, the reigning Turkish champions have done considerably well on the European front. Last season, Galatasaray overpowered German side Schalke 04 in the round of 16 to clash with Real Madrid. For the Lions, therefore, a great deal was at stake on Tuesday. The Turkish side, however, seemed distracted early on as Jose Mourinho masterfully turned a Champions League match into an exhibition game to honor former Chelsea FC player Didier Drogba. Just a few minutes into the game, Cameroon national Samuel Eto'o, who was absent in the first leg, scored to give the Blues a crucial advantage over the away side. Even though Galatasaray had managed to dominate the game three weeks ago after conceding a goal, they failed to fight back this time as Felipe Melo's poor shot in the 28th minute reminded the audience that the Lions' offensive players were on the squad. The Turkish champions conceded a second goal three minutes before half time after their defense failed to clear the ball following a Chelsea FC corner and allowed Gary Cahill to make it clear to everyone that this would be the end of Gala's European campaign.

Frustrated with their performance in the first half, Galatasaray allowed the hosts to dominate the game in the remaining minutes.

In the 55th minute, Chelsea winger Willian failed to exploit an embarrassing mistake from Gala keeper Fernando Muslera, who nonetheless was one of the best players on the field, while Fernando Torres missed six minutes later.

Muslera did a great job fending off advances from the Blues offense including a 66th minute attempt from Frank Lampard and a great shot by Eden Hazard in the final minutes. The Lions' only notable attempt at a goal came in the stoppage time.

Nonetheless, we must acknowledge that it took a lot of effort and determination to pass the group stage where Galatasaray had to fight Italian giants Juventus FC for second place behind Real Madrid. Moreover, the Turkish side did great in the first leg and convinced everyone that they had what it took to push Chelsea FC out of the competition. Now that the European campaign is over however, it is time for tough questions about Didier Drogba's future at the club, Galatasaray's humiliating record in away games (no wins since December) and whether the Süper Lig title is already out of reach. Considering that Fenerbahçe SK lead the Turkish league by 5 points - the Football Federation is yet to reach a final decision about a recent encounter with rivals Trabzonspor that was cancelled after the first half - with nine weeks to go, Galatasaray fans must make their peace with the fact that they will have to wait at least another year for the club to win their 20th title and earn a fourth star. Instead, the reigning champions must leave their frustrating display behind and concentrate their efforts on the upcoming fixture with Bursaspor on March 25 in the Turkish Cup, which they haven't won since a historic 5-1 win against Fenerbahçe in 2005.

Even though many fans view the Turkish Cup as a consolation prize in an otherwise disappointing season, Roberto Mancini and his players could certainly use some more credit at this point. Man of the match: Jose Mourinho, who transformed a Champions League match into an exhibition game for Didier Drogba's return to London.