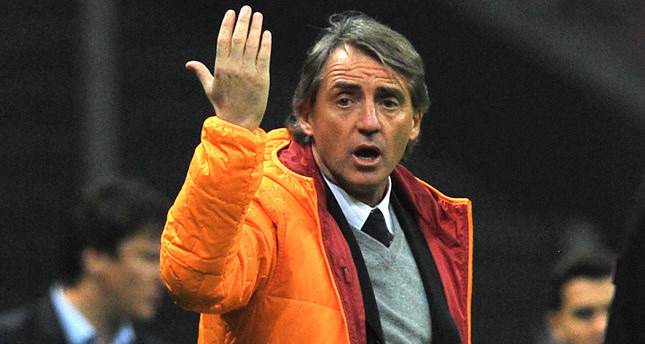 Following Galatasaray's 2-2 Turkish Cup draw against Bursaspor, manager reacts to the chants of angry fans and hints he may pack his bags and depart Istanbul

ISTANBUL — Following Galatasaray's Turkish Cup draw with Bursaspor at the Türk Telekom Arena on Tuesday, Italian Manager Roberto Mancini told the press that he found the chants coming from the stands during the match "appalling.""I came to a lesser viewed league. I don't have to put up with being cursed at and insulted. I could leave tonight or tomorrow," Mancini said at the post-game press conference.
The manager's frustration with the fans began when they chanted "Emperor Fatih Terim" to honor the manager that brought the club six championships and a European Cup during his two stints there. Many fans were angered by the sacking of the former coach and club icon and disapproved of the Galatasaray board's decision to replace him with Mancini. The coach responded to the chants by telling the fans to wait for his response after the match. "I came here to form the club's future squad," Mancini said. "I don't have to put up with being cursed at and insulted. "If you wish to concede more goals then you score in the Champions League, then you could continue with the previous manager," said Mancini referencing Galatasaray's 1-6 defeat at the hands of Real Madrid under Fatih Terim. "Did arsenal respond like this when they lost 6-0? I came here to conduct a project, but now there is no longer any need," he continued. "Does it matter if we win the league or not? What matters is qualifying for the Champions League."

A third-place finish this season is enough for Galatasaray to directly qualify for the Champions League, as current first- and second-place teams Fenerbahçe and Beşiktaş are unable to attend this year's competition due to their involvement in the 2010 match-fixing scandal. Roberto Mancini signed a three-year contract with Galatasaray in September which sees him pocket 4.5 million euros (TL 13.7 million) annually.