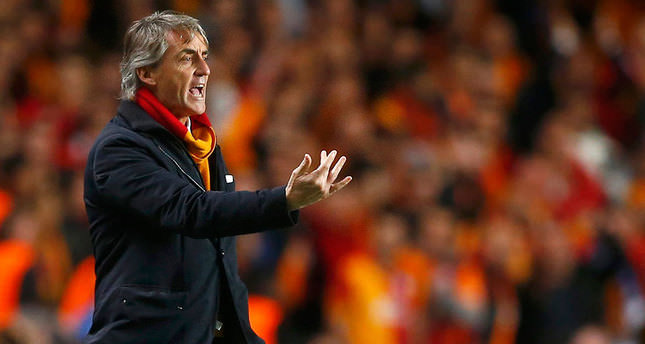 Galatasaray President Ünal Aysal took a trip on his private jet to support the struggling Lions in their match against Torku Konyaspor on Saturday, but left buried deeper in a dilemma over coaching

ISTANBUL — Following the final whistle which saw Galatasaray drop points against Torku Konyaspor, club President Ünal Aysal was left to regret his trip to Konya as Lions fans at the Atatürk Sports complex turned their jeers from manager Roberto Mancini to him.

Angered by Galatasaray's five successive away draws and falling out of the race for the title, fans once again invited the Italian manager to resign in favor of the return of club legend Fatih Terim.

Club President Aysal was the man behind the sacking of the coach that brought Galatasaray four successive championships and a UEFA Cup in his first spell and two more championships in his second. Angered by Terim's decision to manage both the Turkish National team and Galatasaray, Aysal decided to part ways with the man club fans had dubbed "the Emperor" in order to bring Mancini to Turkey.

Aysal had envisioned that the Italian would do what Terim couldn't: build a Galatasaray squad to resist the tests of time, a team that could reach the quarterfinals of the Champions League annually. On paper Mancini was a big name that could draw big talents. To do him justice he has done just that, as the likes of John Obi Mikel, Bacary Sagna and Edin Dzeko have all said that they would not mind playing under the manager in Istanbul.

Aysal made sure to entice the Italian with a 4.5 million euros-a-year (TL 13.7 million) deal to guarantee his services. Much to Aysal's delight, initially his plan seemed to work as Galatasaray not only overcame Juventus to advance to the Champions League Group of 16 and domestically the manager initially managed to close the gap in the title race with arch rivals Fenerbahçe to just four points.

However the last four weeks have seen Galatasaray's performance level drop as the Lions seem unable to win away games against the meekest of opponents and the team that functioned as a single unit under Terim is now clouded with chemistry issues.

As fans in the stands call for Mancini's resignation, Aysal is faced with a greater dilemma. He could send away the Italian and be forced to pay his salary in full while acknowledging the failure to build a sustainable squad, or he can continue to sit uncomfortably as crowds turn their angst against him.

As for Mancini? The former Inter Milan and Manchester City manager said he had no issues packing his bags and leaving the country as the English rumor mill suggests that Arsenal have lined him up as a successor to Arsene Wenger, should the Frenchman retire or be sacked.

Regardless of Aysal's decision, Galatasaray supporters have taught him a lesson on just how much of his authority they are willing to put up with. Though the final say on Galatasaray's managerial affairs are his, Aysal will face a headache regardless of how he decides to rule on the matter.