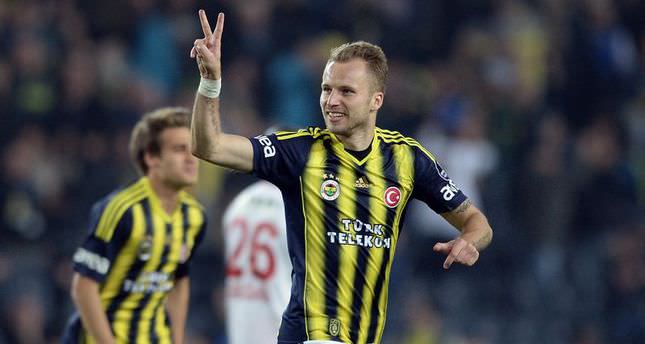 by daily sabah
Apr 14, 2014 12:00 am
ISTANBUL — Fenerbahce now find themselves just three points away from clinching title success following their 4-1 domination of Antalyaspor.

Caner Erkin opened scoring at the Şükrü Saracoğlu Stadium in Kadıköy in the 21st minute. Antalyaspor would level the playing field by equalizing in the 31st minute through Isaac Promise's goal.

The draw would not last for long as Fenerbahçe's center defender, Michal Kadlec, would once again give his side the lead in the 31st minute.

The Czech international would find the net once more in the 89th minute before Moussa Sow would finalize the Canaries' win in the 90th minute by scoring their fourth goal.

Now all that stands behind Fenerbahçe declaring an early title victory is this Sunday's match against Beşiktaş at the Atatürk Olympic Stadium.

Host side Beşiktaş will have the advantage of playing in front of over 65,000 of their fans as the Black Eagles look to gain a conciliation win from the derby.