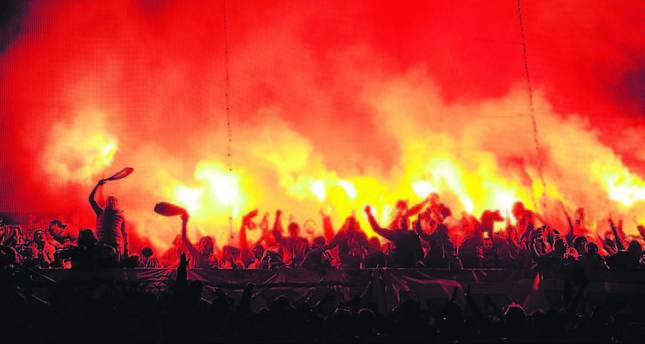 ISTANBUL — An increase in hooliganism across Europe has raised safety concerns for spectators of Europe's favorite pastime. This year has seen many shameful displays and tragedies befall both domestic and continental competitions.

In Paris riots broke out twice in two months as Paris Saint-Germain's (PSG) ultras first assaulted visiting Bayer Leverkusen fans in front of the Parc des Princes in the first elimination round of the Champion's League.

Que the quarterfinals and the Parisian police had a full blown riot on their hands as 100 Chelsea and PSG ultras a piece brawled in the streets of the French capital.

Sweden's domestic league's opening day was scarred by violence as Helsingborg and Djurgardens fans clashed at halftime in the stadium. The Turkish Super League saw two matches end before completion this season as Beşiktaş fans raided the pitch during their home derby against Galatasaray at the Atatürk Olympic Stadium and Fenerbahçe had to make an early exit at Trabzon's Hüseyin Avni Aker Stadium when Trabzonspor fans hurled an array of dangerous objects onto the pitch including flares, stones, batteries and cellphones. Such occurrences have become commonplace in Turkey to the point where no one wonders if they will occur but rather when.
Flares, laser pointers and hurling projectiles toward the players from rival teams have unfortunately become intertwined with the culture of the game. The Turkish Football Federation (TFF) has long acknowledged the danger behind this growing hooliganism and have now introduced the "Pasolig" (a name deriving from league pass) in order to restore control and civility within stadiums.

The Pasolig is much like your ordinary bus pass. The pass will be distributed to football fans through online applications available on the Pasolig website. The card will function as a medium to purchase match tickets and identify exactly who is seated where in the stadium.
The Pasolig passes will have set one year expiration dates. The federation believes that these passes will be pivotal in identifying those who enter stadiums on match day as well as assisting in banning those who have engaged in acts of hooliganism outside of Turkey's stadiums from obtaining future passes. The Pasolig will be a medium of convenience and security for those who wish to enjoy sporting events on sight in real time.

These revolutionary new passes will enter active use during this Sunday's Istanbul derby match in which Beşiktaş will host Fenerbahçe in Europe's eighth-largest stadium, the 75,000-78,000 capacity Atatürk Olympic Stadium.

This specific match was selected by the TFF due to the difficulty in controlling large crowds drawn to the stadium on derby days and to deter a repeat of the last derby hosted at the mega stadium.

If Beşiktaş's infamous ultra-group Çarşı want to remain a part of their club's stadium atmosphere, they will now have to remain in their seats as they play against Fenerbahçe and refrain from raiding the pitch as they did against Galatasaray's last fall.