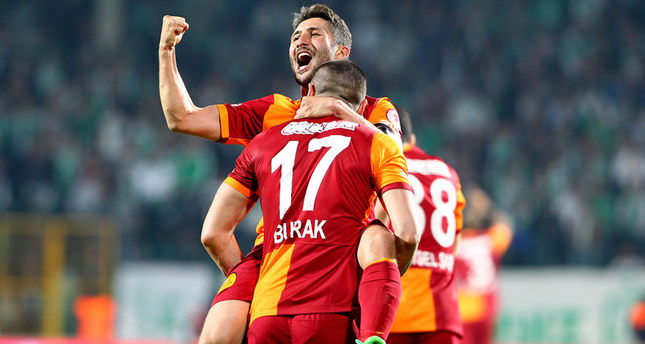 Having already fallen out of contention to win the Turkish Super League, Galatasaray fans will rejoice at the prospect of potentially bringing home the Turkish Cup. The first leg of the semifinal matchup at the Türk Telekom Arena ended in a draw as Bursaspor were able to come back from a 2-0 deficit. Wednesday night's matchup saw the tables turn when Galatasaray and Roberto Mancini overcame their opponents after falling behind early in the first half.

Tensions immediately ran high as an altercation between Burak Yılmaz and Volkan Şen erupted into a full-blown brawl between the two sides and both managers had to take to the field to pull their player away from the heart of the argument to prevent further escalation.

Match officials decided it was fit to present both players with yellow cards and not penalize the many other players as well as the two managers that had been drawn into the argument. Bursaspor took the lead in the 28th minute as Fernandao headed the ball past Galatasaray keeper Fernando Muslera. Fernandao struck again five minutes later, bringing the local crowd at the Bursa Atatürk Stadium to its feet with a wonderful bicycle-kick which looked to be the final nail in the coffin for Galatasaray's hopes for silverware this season.

A distraught Mancini regrouped his devastated squad later in the half, resulting in a critical 45+1 minute strike from Wesley Sneijder, giving the Galatasaray a moral boost going into the second half. This moral boost became evident as soon as the Lion's continued to press on through the efforts of Sabri Sarıoğlu and Sneijder. These attacks quickly paid off as İbrahim Öztürk met the Dutchman's cross with his hand, granting Galatasaray a chance to level through a penalty.

Selçuk İnan, known for his ability at taking spot kicks faced no difficulty sending the ball past Sebastien Frey in the 50th minute.

The visitors grabbed the lead just three minutes later when Frey parried Veysel Sarı's shot strait into the path of Burak Yılmaz, handing the guest's the easy opportunity to take the lead. Burak linked up with Sarıoğlu in the 68th minute to take Galatasaray further in front by knocking the defender's back post cross into an empty net.

İbrahim Öztürk sunk Bursaspor into further dismay as he slid into Sarıoğlu in the penalty box and took the ball off the defender with his right hand. Filipe Melo stepped up to the spot to record Galatasaray's fifth and final goal in the 71st minute.

Sarıoğlu found himself unlucky shortly afterward as Galatasaray's last real threat on goal found its way off the cross bar.

However emphatic the comeback win might have been to Galatasaray, their match ended on a sour note as Burak Yılmaz received a second yellow card for a poor tackle, leaving the Lions to play the final match without their star striker.