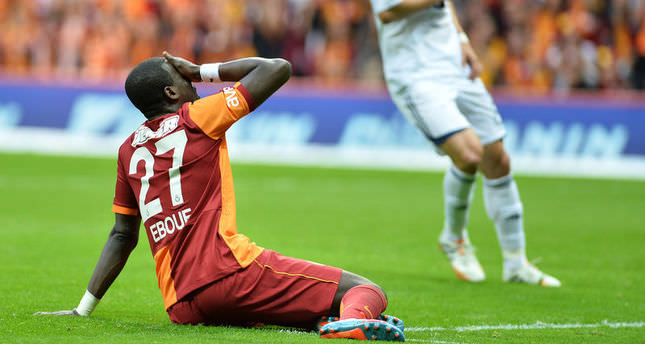 ISTANBUL — What should have been an easy match for Galatasaray soon turned into the second-worst home defeat in the history of the Türk Telekom Arena as Kasımpaşa brought the Lions and the atmospheric stadium to a complete halt.

Kasımpaşa grabbed the early lead through a fifthminute penalty strike by Oscar Scarione. The penalty position however was shroud in controversy as Galatasaray defender Semih Kaya was clearly fowled in the buildup of play which also saw veteran defender Hakan Balta sent off with a red card which hardly seemed justified.

Galatasaray saw the first half end rather uneventfully as they tried to recuperate and stave off further goals.

However, the hosts were unable to find their bearings and hold off their visitors for long as six minutes after the start of the second half Kasımpaşa doubled their lead when Tabare Viudez beat Fernando Muslera.

Things would only get worse for Galatasaray and its fans as Kasımpaşa added a third goal to their lead in the 64th minute as Scarione grabbed a brace. Kasımpaşa added insult to injury in the 77th minute by finding their fourth and final goal through former Galatasaray defender Yalçın Ayhan.

Further pressure has now been placed on Italian manager Roberto Mancini to resign following what was arguably Galatasaray's most dismal display in the past three years. The stands, restricted to only women and children, a punishment for the vulgar display produced by Galatasaray's fans in the derby match against Fenerbahçe, called for the manager and the board of directors' resignation (because of the board's unwillingness to pay the 9 million euro [TL 26.44 million] fee needed to terminate Mancini's contract.) Mancini and club Captain Selçuk İnan were quick to point fingers at match official Cüneyt Çakır for the red card and penalty he gave the Yellow Reds in the opening stages of the match. "If he [Çakır] is the best referee in Turkey, there is a problem," said Mancini. "The referee unfortunately used his decisions to only favor the other team." "But if it [the match result] was due to poor performance, then I take full responsibility" he continued. "I hope I never come face to face with him again." "I never shared my thoughts about any referee [before]," said İnan. "But as a FIFA representative, Çakır's decisions were unbefitting." "We were shocked that he didn't call the foul in that position [the position leading in which Kaya was shoved to the ground leading up to the penalty]. I have been playing football for years and these calls always go in favor of the first foul," he stated. "You can't play with the fate of a team like that, we have our rights," he continued.

İnan also went on to criticize the Turkish Football Federation's decision to schedule their league matchup so close to the Turkish Cup semifinal match they played on Thursday. "Two days ago we played an away Cup match at Bursa," İnan said. "Why did they schedule us to play on Saturday instead of Sunday or Monday?" "No one mentions what is going on behind closed doors [at the Federation], I had to come out and say something. I hope they become more careful, otherwise we will be forced to question their intentions."
RELATED TOPICS