Atletico Madrid VS. Chelsea ends in a stalemate 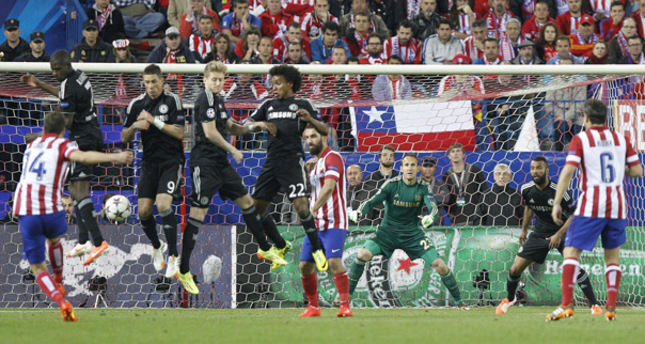 by Apr 23, 2014 12:00 am
LONDON — Atletico Madrid failed to breach Chelsea's wall of resistance at the Calderon and they will now hope for more from their leading marksman Diego Costa in the decisive return leg of their Champions League semi-final tie in London.

Costa's goals have fuelled Atletico's trophy charge both domestically and in Europe this season, but against Chelsea, who are reportedly interested in signing him, the 25-year-old striker couldn't find the back of the net in the goalless draw on Tuesday night.

It has been a remarkable season for the Brazilian-born striker who has chosen to represent Spain and, having won his first cap against Italy, is set for a place in their World Cup squad.

Costa has come out of the shadows of Radamel Falcao who left Atletico for Monaco ahead of this season and he has now hit 27 goals as Atletico lead the La Liga title race.

His pace and physical strength have helped him to a further seven in the Champions League but against Gary Cahill and John Terry he failed to create much space.

A strong challenge early on from Terry sparked an angry reaction from Costa, who is well known for his short fuse, but after that the contest rarely looked like it would boil over.

Raul Garcia saw more of the ball in a game where Chelsea successfully blocked the supply to the forwards with Koke in particular on the right unable to make much of an impact.

Atletico had 65 percent of the possession but they couldn't find a way to goal.

"We tried different approaches, in the final 12 or 13 minutes with Gabi and Koke in the middle, Sosa and Arda on the wings, but our rivals defended well," coach Diego Simeone told a news conference.

"The idea was to break up their defensive organisation but we lacked a cutting edge. We will have to see whether this result will be good enough for us."

Gabi did impose himself on the midfield and his work-rate and incisive passing will be badly missed in the return leg, where he is suspended. Atletico will be quietly confident, however, that they can get the result they need at Stamford Bridge next Wednesday to reach the final in Lisbon.

They are a compact side and with Diego Godin and Joao Miranda at the back, they are capable of resisting a lot of pressure, while with Chelsea having to come out of their shells, Atletico can pounce on the break.

"Each team has their way of playing and we were on top but we couldn't score," Miranda told reporters.

"At home they will have to attack more and there is no doubt that we can surprise them."

His view was echoed by team mate Diego Ribas.

"The 0-0 is not what we were wanting but it isn't bad either. The tie is still open and the game there (Stamford Bridge) is likely to be different to this one. We need to be clever and take our chances," said the attacking midfielder.