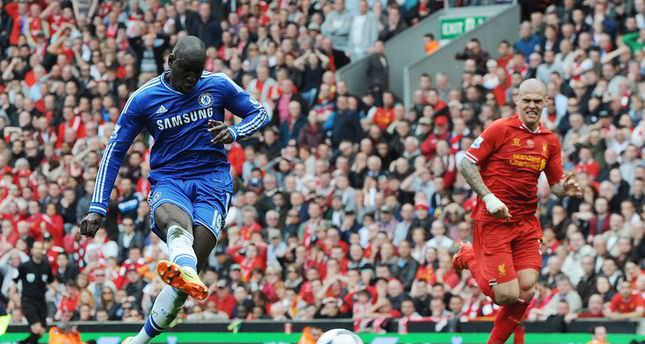 by Associated Press
Apr 29, 2014 12:00 am
LONDON — Jose Mourinho riled his former assistant Brendan Rodgers as Chelsea successfully stifled Liverpool and scored twice against the run of play to win 2-0 on Sunday and dent the Premier League leaders' hopes of a first title in 24 years. However unambitious Chelsea appeared at Anfield, goals at the end of each half from Demba Ba, who seized on Steven Gerrard's slip-up, and Willian ended Liverpool's 11- game winning streak in the league. Mourinho's side is just two points behind Liverpool with two games remaining. "They obviously sat very deep - I think there were two buses parked today, never mind one," said Rodgers, who was a coach at Chelsea between 2004 and 2008. "It was clear that they'd come certainly not wanting to win the game, with the time wasting."

That claim was unsurprisingly challenged by Mourinho - "Time wasting? What's that?" - with the Chelsea manager affronted by criticism of his tactics. "When a team defends well you call it defensive display," he told reporters. "When a team defends badly and concedes two or three goals you don't mention a defensive display." But Mourinho continued his policy of dismissing Chelsea's title prospects, stressing: "We have no chance."

It's not that unrealistic for Chelsea, but Manchester City has replaced Liverpool as the team which has the destination of the trophy in its own hands. Third-placed City closed the gap on Liverpool to three points by winning 2-0 at Crystal Palace on Sunday, and it has a game in hand to play at Everton on Saturday. So by the time Liverpool plays at Palace next Monday it could have been knocked off the top on goal difference by City. It's a long time to dwell on a defeat that will suppress the fervor that had been growing at Liverpool that the team will win the English title for the first time since 1990, having started the season as 33-1 outsiders with bookmakers.