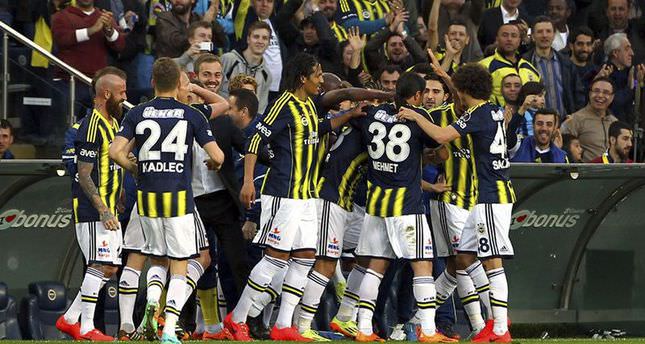 Despite the boring 0-0 draw against Çaykur Rizespor at Kadıköy, Fenerbahçe have the 12-point lead they need to seal the fate of this year's Turkish Super League

ISTANBUL — Fenerbahçe fans across Turkey took to the streets in jubilation on Sunday night to celebrate their club's 19th Turkish Super League win. Though the match against Çaykur Rizespor ended with the two clubs leaving the pitch without a score, the draw result meant that the Yellow Canaries now will have the 12-point lead they need to bring home the title, as they stand 12 points ahead of second place arch rivals Galatasaray with only three games remaining in the season. This season's win translated into Fenerbahçe's 19th title win, bringing them on par with Galatasaray in terms of overall club success. This win came also as a symbolic victory for the Yellow and Navy side as the club's executives were found guilty for involvement in matchfixing following a probe into an incident where Fenerbhaçe was granted the 2010-2011 title in place of Trabzonspor. Fenerbahçe President Aziz Yıldırım, who is now serving a six-year and three-month sentence for his part in the match-fixing scandal issued a statement from prison congratulating team Captain Emre Belozoğlu and his teammates on their momentous achievement.Though Fenerbahçe clinched the Turkish Super League this season, they have been banned from taking part in next year's UEFA Champions League, having deferred the second year of their two-year ban from continental competition to the 2014-2015 season.

Though a few weeks still remain before the European continent blows its whistle on the end of the football season, many of the top leagues already have their winners.The continent's two earliest results came from the German and Austrian Bundesliga competitions. In Germany, Bayern Munich clinched their title win while Red Bull Salzburg impressed in Austria. In Greece Olympiacos continued their domestic league domination while Ajax won their fourth consecutive Dutch Eredivisie.

Paris Saint-Germain looks certain to win the Ligue 1, Juventus remain in pole position in the Serie A and Porto are running the Portuguese Primeira Liga into its closing stages.In the English Premier League Liverpool, Chelsea and Manchester City still lead in a three horse race for the title while in La Liga Madrid's two giants Real and Atletico still need to play their last month of fixtures.