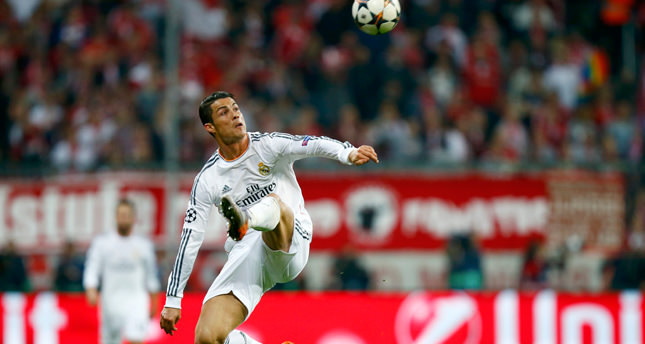 by Apr 30, 2014 12:00 am
MUNICH, Germany — Real Madrid's Cristiano Ronaldo on Tuesday broke the record for the most goals in a European Cup or Champions League season in his side's 4-0 semi-final second-leg victory over Bayern Munich.

Ronaldo picked up his 15th and 16th goals of the campaign to help put the Spanish side into the final in Lisbon on May 24 as Carlo Ancelotti's side humiliated the defending champions.

The Portuguese forward's two goals helped him eclipse the previous best of 14 in a season registered by Barcelona's Lionel Messi in 2011-12 and Jose Altafini of AC Milan in 1962-63.

The World Player of the Year has reached the new record tally in just 10 appearances in the competition this season, his tally also including a hat-trick against Galatasaray in the group stage and braces against FC Copenhagen, Juventus and in both legs of the last-16 tie against Schalke 04.

He has now scored 66 Champions League goals and is closing in on former Real Madrid striker Raul's overall record for the most goals in the competition of 71.

His goals helped take Real through to their first Champions League final since they last lifted the trophy in 2002, when Zinedine Zidane inspired them to a 2-1 win over Bayer Leverkusen in Glasgow.

They will now play either Chelsea or Atletico Madrid, who meet in the second semi-final on Wednesday at Stamford Bridge after the first leg finished 0-0.
Last Update: Apr 30, 2014 1:53 am
RELATED TOPICS