We are all monkeys 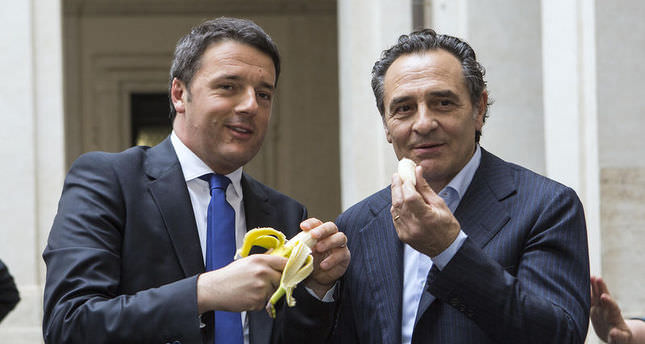 Brazil's President Dilma Rousseff, FC Barcelona football club players and other major sporting figures have lent their support to Brazilian footballer Daniel Alves after a racist act at a match between Barcelona and Villarreal in Spain

SAO PAULO,Brazil — A spectator threw a banana at Alves during a Spanish Championship match, but the Barcelona defender, who also plays for the Brazilian national side, took onlookers aback by picking up the fruit and taking a bite in defiance. President Rousseff called Alves' response to the racist slur "powerful."

"Footballer @DaniAlvesD2 gave an audacious and powerful response to racism in sport," she wrote on her official Twitter account, lamenting the frequency with which the events also occur in stadiums in Brazil.

FC Barcelona said in a statement: "The immediate, public condemnation of those aggressions seen at the El Madrigal stadium are a step in the right direction, a direction that will convert football pitches into spaces where the inadequate behavior of certain people is first isolated and then eradicated for good."

The fan in question has been identified and banned from the stadium in the Spanish city of Villarreal, Folha de S.Paulo newspaper reported.

Fellow Brazilian player Neymar da Silva Santo, who also plays for Barcelona, sparked a campaign on his Instagram account with the hashtag #somostodosmacacos - Portuguese for "we are all monkeys."

The movement has since seen fellow footballers, celebrities and tens of thousands of fans post photos of themselves on the social media app, holding or eating bananas in support of the anti-racism campaign.

"I didn't know that a spontaneous act would have such a repercussion," he said in an interview published on the Brazilian Football Confederation website, adding that he hoped the campaign would "make racists feel ashamed."

"I am happy to have been able to contribute to this fight; we are in the 21st Century and these things should no longer exist," he said.
A number of racist attacks against Brazilian football figures have made headlines in recent weeks, including one against Santos football club midfielder Marcos Arouca da Silva who was branded a "monkey" by a fan at a Paulista state championship match in Brazil.

Hosts Mogi Mirim football club were banned for hosting matches until a fine of $21,000 was handed down for the racial jibe. President Rousseff has led calls for an end to racism, particularly in Brazilian football, and has announced that Brazil will use its hosting of the World Cup this June and July to help stamp out racial discrimination, something to which organizers FIFA have agreed. Racism is a criminal offense in Brazil, where over half the population described themselves of "black" or "of mixed race" according to the most recent census, but few people are charged and even fewer actually punished.

Racism has become a growing concern throughout many European football leagues, most notoriously the Italian Serie A and the Greek Superleague. Lazio is the most notable of the offense committing clubs as both players and fan groups have aired their ill-suited ideologies on multiple occasions. These leagues have seen ultragroups in the stands throw bananas and peanuts onto the pitch in order to insult the players of visiting sides.Unfortunately, Turkish domestic football has not been free and innocent of these occurrences. Istanbul's Şükrü Saraçoglu Stadium has witnessed the same displays of racism just last season when League winners Galatasaray played the last match of the season against home side Fenerbahçe.