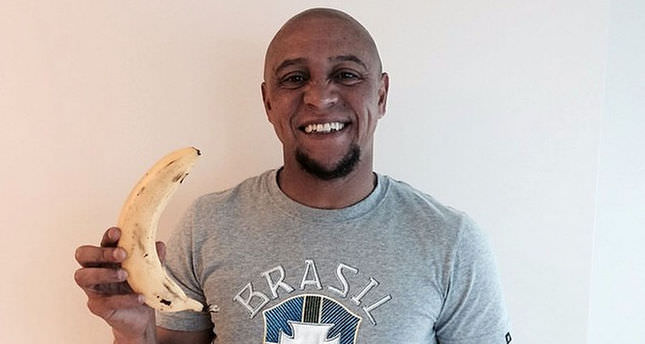 by Daily Sabah May 01, 2014 12:00 am
ISTANBUL — Following the incident in which Daniel Alves was racially abused by a Villa Real fan who threw a banana on the pitch to insult the Brazilian, the world football world erupted in a scene of support for the Brazilian defender. Alves' cool reaction in which he ate the banana before taking the corner kick drew the attention of football fans the world over. Politicians, athletes, news personalities and countless fans shared photos of themselves eating bananas in what became the "We are All Monkeys" campaign for social awareness.
Turkish National team manager Fatih Terim also expressed his support to end racism in football as he posed with hand of bananas on his desk with the message say no to racism written across them in different languages. Legendary former Brazilian defender and current coach of Sivasspor Roberto Carlos also posed with a banana in hand while former Fenerbahce captain Alex de Souza posted a photo on Instagram of himself imitating a monkey.