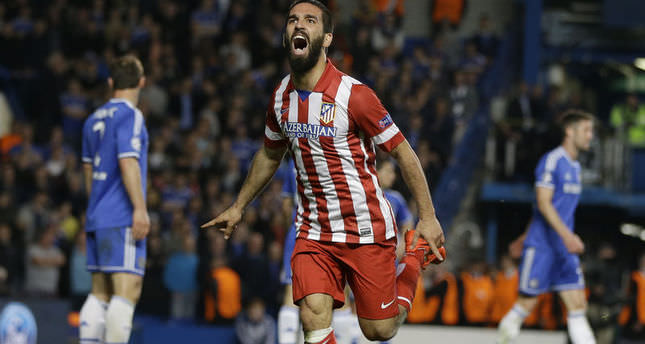 LONDON — Although former Atletico striker Fernando Torres put Chelsea in front at Stamford Bridge after a scoreless first leg, Adrian Lopez leveled before halftime to give the surprise Spanish league leaders the crucial away goal.

Atletico's place in a first European Cup final in 40 years was secured in the second half when Diego Costa netted a penalty on the hour, and Arda Turan knocked the ball into an empty net in the 72nd minute.

It was a fourth successive semifinal loss for Chelsea manager Jose Mourinho, after previous setbacks at Real Madrid before returning to London last year.

Without Mourinho, Madrid has ended a 12-year wait to reach a Champions League final, which will be a city derby for the first time in Lisbon on May 24.

By then, Atletico could have been crowned champions of Spain for the first time since 1996. Just two wins are required from the final three matches to break up the Barcelona-Real Madrid stranglehold on the trophy.

Mourinho's first season back at Chelsea could now end without a trophy, having failed to deliver European football's top prize to the club unlike at Inter Milan and FC Porto.

Although the Blues are second in the Premier League, they require leader Liverpool and third-place Manchester City, which has a game in hand, to slip up in the final matches.

If Mourinho wanted to prove criticism of recent ultra-defensive tactics didn't affect him it came with the lineup, with six defenders in the starting 11, although Cesar Azpilicueta was often found in an advanced position down the right flank.

But it was an anxious start for the hosts when Mark Schwarzer, deputizing in goal for the injured Petr Cech, was beaten after four minutes and only the crossbar kept out Koke's looping shot. Chelsea was providing little threat, aside from David Luiz's speculative overhead kick from close range.

Indeed, the liveliest activity early on unfolded in the Atletico technical area where coach Diego Simeone frantically responded to his team's every move with his hands and feet while Mourinho remained almost static.

This was a night when Chelsea had its goalkeepers in both nets. Thibaut Courtois was making his Stamford Bridge debut, but for Atletico where he has been on loan since joining Chelsea from Genk in 2011. The Belgium international had little to do before he was picking the ball out of his goal in the 36th minute after being beaten by a player who started his career at Atletico.

Willian outmuscled Diego Godin and Filipe Luis on the right flank, and as he fell over, Azpilicueta picked up possession. The Spaniard swept the ball back for Torres, who beat Courtois with a shot that deflected off Mario Suarez.

Torres doesn't often get the chance to celebrate a goal - this was just his 10th all season - but he didn't revel in scoring against his former side.

Not that Chelsea had much to celebrate for long as its defense was unpicked too easily.

Tiago floated the ball to the byline where Juanfran had space to cut it back, past John Terry and Ashley Cole, to the unmarked Lopez to strike into the net.

It took Schwarzer's two-handed save at the start of the second half to deny Turan's skilful shot from close range.

Chelsea's search for a goal saw forward Samuel Eto'o brought on in place of left back Cole in the 54th minute. The Cameroon international's first contribution was back in defense, bringing down Diego Costa as he struggled to contain his fellow forward.

Before taking the spot kick, Diego Costa placed and then replaced the ball on the spot several times - earning a booking for time wasting. But he eventually dispatched the ball in the net.

At the other end, the post denied Luiz's header from Willian's free kick. And although Schwarzer's post kept out Turan's initial header on Atletico's next opportunity, the winger moved into a central position to tap the rebound into an empty net in the 72nd.


And Simeone, a nervy figure all night, was finally unburdened of his anxieties, launching himself on a Mourinho-style dash down the touchline.