Liverpool fall out of EPL title race after shock draw 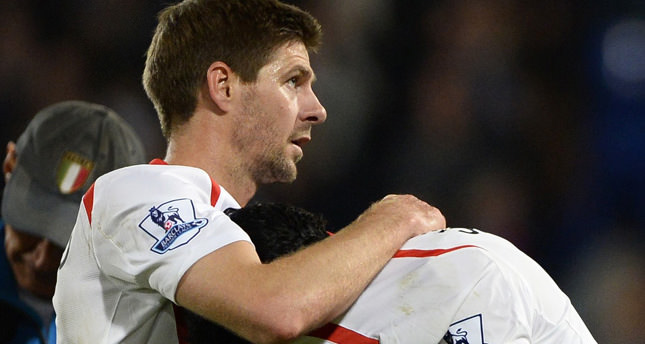 by Associated Press May 07, 2014 12:00 am
LONDON — Liverpool regained the lead in the English Premier League but the crown slipped further from its grasp as it threw away a three-goal lead in a 3-3 draw away to Crystal Palace today.

The stunning outcome put Liverpool a point above Manchester City, but City has a game in hand and can win its second title in three years with four points from its last two games.

Overconfidence sowed the seeds of Liverpool's downfall against Palace, Rodgers said, and suggested his team at times was reminiscent of "Roy of the Rovers," a British football comic strip famed for depicting swashbuckling play.

Liverpool was romping to a bonus big win to help its goal difference thanks to a first-half goal by Joe Allen before Daniel Sturridge and Luis Suarez scored in quick succession in the second to be leading 3-0 by the 55th minute.

Then, Damian Delaney exposed Liverpool's vulnerability to counterattacks as he scored in the 79th, launching a dramatic turnaround and deflating the Reds.

They didn't recover, as Dwight Gayle cut the deficit to one two minutes later, and drew level with his second goal in the 88th.

Suarez, the league's new player of the year, was in tears on the final whistle and covered his face with his shirt as he left the pitch, with his team highly unlikely to claim a first title in 24 years.

The title race is certain to go to the last day of the season and City's superior goal difference means a win and a draw from its last two games will guarantee the title.

Leading only 1-0 at the break, Liverpool came out fighting in the second half, forcing Palace goalkeeper Julian Speroni to tip a Sturridge shot onto the post in acrobatic style, before Suarez missed an open goal on the rebound.

Sturridge doubled Liverpool's lead with a deflected shot on 51 minutes, and Suarez combined with Raheem Sterling to make it 3-0 with a calm low finish two minutes later.

Chasing a big win to reduce City's goal-difference advantage, Liverpool continued to pour men forward and was repeatedly caught on the counterattack as Palace scored three goals in the space of nine minutes.

Delaney's 25-yard speculative shot veered in off Glen Johnson's leg into the top right corner of the net, then Gayle scored his first, coolly finishing off a Yannick Bolasie cross.

It has ended up shaping the title race, adding Liverpool's scalp to that of Chelsea, beaten 1-0 while leading the league in March.