Peace won at the game delayed for 84 years 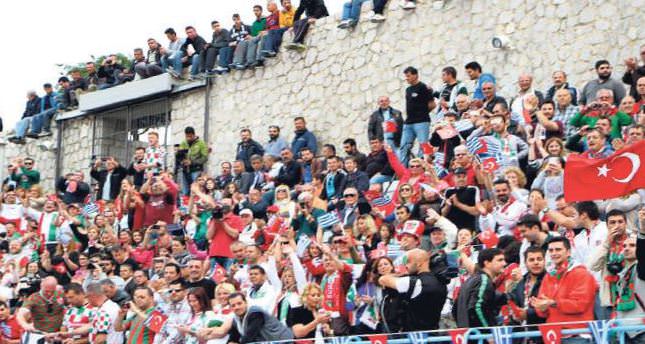 CHIOS, Greece — A friendly soccer match between Turkish and Greek soccer teams - interrupted by a downpour in its third minute 84 years ago - ended Saturday in a 5-5 draw, on the Greek island of Chios. The 2014 game saw Greek club Lailapas face Turkish opponents Karşıyaka, both wearing kits identical to those the two sides were wearing during their abortive clash over eight decades ago.

Karşıyaka Mayor Hüseyin Mutlu Akpınar was among several who switched teams mid-play, firstly captaining Karşıyaka and then scoring a goal for Lailapas. "I've played many games but today's was meaningful,"

Mayor Akpınar told Anadolu Agency (AA) after the match. "The friendship of the two Aegean sides was manifested once again," he said. At the 65th minute of the match, fans placed Turkish and Greek flags in the midfield. "The historic and symbolic meanings [of the match] are very high," Turkish Ambassador to Greece, Kerim Uras told AA. The original match was played on Dec. 7, 1930, eight years after the end of the bloody 1919-1922 Greco-Turkish War. The game was part of a framework of rapprochement between Turkish leader Mustafa Kemal Atatürk and his Greek counterpart Eleftherios Venizelos.

The idea for the friendly originally came in 1930 during a visit by a cultural association backed by 40,000 Greek emigrants who were dislocated from Turkey and living on Chios.

The idea was born when the group visited Turkish friends, according to Greek historian Yiannis Makridakis. Current Lailapas trainer, Mihalis Kottakis, proposed the match be completed once he heard the story from Makridakis at an event in 2012. Karsiyaka subsequently accepted the invitation. "This event symbolizes the unity of Turkish and Greek peoples," Makridakis said.

Lailapas was one of Greece's oldest and formerly most competitive clubs from its foundation in 1925 to 1950 when it was forced to close. The club was refounded in 2009 and plays in Greece's fourth division. Karşıyaka is a Turkish sports club founded in 1912 in Karşıyaka, İzmir, western Turkey. It plays in the second-tier Turkish Major League.