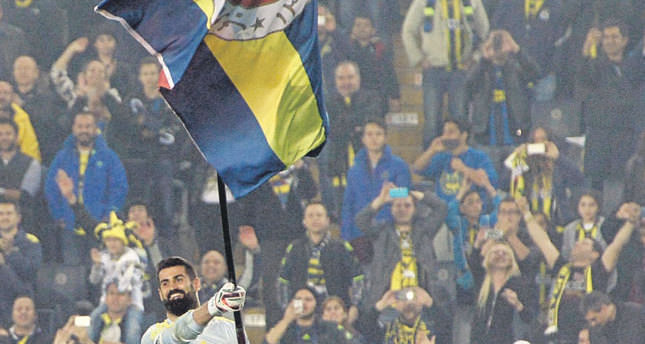 Turkey's basketball, football and volleyball leagues are coming to a close after a season packed with excitement. Fenerbahçe were declared champions of the Spor Toto Super League two weeks before the end of the season and celebrated their title win last Friday at the Şükrü Saraçoğlu Stadium in Kadıköy. Though there is still one match remaining, this year's season looks like it will come to stereotypical finish as Fenerbahçe, Galatasaray, Beşiktaş and Trabzonspor seem likely to round off the top four of the league table.

Any surprise that comes in the top flight would involve Roberto Carlos' Sivasspor displacing Tranbzonspor to reach European Football competition as the two clubs are only separated on goal-point-deferential. Despite Fenerbahçe have been crowned this year's champions, they are unable to participate in the Champions League as they are yet to serve the second year of their two year ban for matchfixing, thus Galatasaray and Beşiktaş will represent Turkey in the competition. The PTT 1 League ended with Istanbul Büyük Şehir Belediye Spor and Balıkesirspor guaranteed direct promotion while playoffs are being held to determine what other team will be promoted. Galatasaray started the season off with a 1-0 win over Fenerbahçe to lift the Turkish Super Cup and ended it by defeating Eskişehirspor 1-0 to win the Turkish Cup in what for many fans was a disappointment of a season both internationally and domestically. Galatasaray were unable to show the breathtaking performance which saw them make the Champions League quarterfinals last year. Their dramatic win over Juventus saw the Lions advance from the group stage, however two disappointing performances against Chelsea saw Galatasaray fall out of the competition earlier than expected.

In the women's volleyball League Vakıfbank again won the championship in a dramatic race with Fenerbahçe. Their consecutive championship win came as they beat the Yellow Canaries by one point in the league. Ezacıbaşı and Galatasaray Daikin rounded off the league's top four. Vakıfbank became the runners up in the CEV Women's Champions League, losing in the final to Dinamo Kazan and Ezacıbaşı came in fourth.

In the men's basketball league Banvit, Fenerbahçe Ülker, Anadolu Efes, Galatasaray Liv Hospital, Beşiktaş İntegral Forex, Pınar Karşıyaka, Uşak Sportif and Tofaş have qualified for the playoffs which are about to begin.

The Women's basketball league came to a face-off between Galatasaray Odeabank and Fenerbahçe in what would be a rematch of the FIBA Women's EuroLeague final.

Galatasaray Odeabank overcame their arch rivals in both finals to bring home the championship and the continent's highest accolade. This year's FIBA Women's EuroLeague finals proved the advanced stage of Turkey's Women's Basketball League as Fenerbahçe, Galatasaray Odeabank and Kayseri KASKİ filled three out of the four semifinal spots. Galatasaray's wheelchair volleyball team once more won the Turkish domestic league as well as their fifth European championship in six years.

Overall Turkey's most watched sporting leagues once more came to a predictable close. With Turkey not participating in the FIFA 2014 World Cup in Brazil, sports fans will have to root their second-favorite team in this summer's most important competition as most Turks are left cheering for Germany, Spain and Bosnia.
Last Update: May 12, 2014 3:12 am
RELATED TOPICS