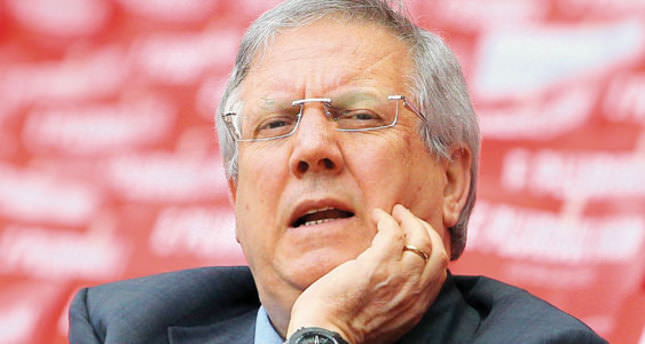 by Daily Sabah May 13, 2014 12:00 am
ISTANBUL — Following a season of strong performances Fenerbahçe were finally able to lift their 19th Turkish Super League title at a ceremony at the Şükru Saraçoğlu in the Istanbul district of Kadıköy but the festive atmosphere soon turned sour when the club president lashed out at fans. Thousands of fans had gathered to greet the yellow Canaries' bus on Bağdat Avenue and thousands more gathered at the stadium to watch Turkish Football Federation President Yıldırım Demirören hand the club their hard-earned trophy.

At the ceremony the stands full of fans began chanting "Alex, Alex, Alex" in memory of former club Captain Alex de Souza, a player who fell out with the club leadership in 2012, to which Fenerbahçe President Aziz Yıldırım responded angrily. "I will never let you [the fans] back into this stadium. You unmannered, uncultured dogs with money, I curse you this severely. Enough with Alex already," said Yıldırım. "I brought Alex to assist this club. I sent him away because he was no longer an asset." "Don't take away from the efforts of these lads, don't be vulgar," continued Yıldırım. "Since the third of July we have been working toward this. Unlike you, we didn't yell 'match-fixing, matchfixing' after the game with Karabük. You are not Fenerbahçe supporters. I will never let you back into these stands, I swear this to you in front of all these people," he concluded. Yıldırım could face a period of up to six years in prison for his role in a 2010 match-fixing scandal.
Last Update: May 13, 2014 2:13 am
RELATED TOPICS