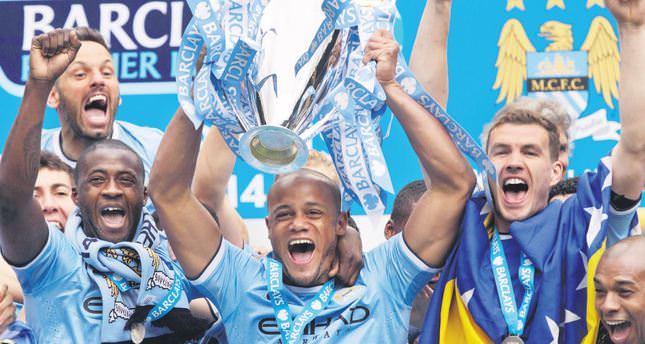 The songs and the chanting started well before the final whistle this time, and as it blew, Manchester City fans setting off blue flares streamed onto the pitch in their thousands

LONDON — For the second time in three seasons, a team so long the underdog is the Premier League champion and it didn't need any last-minute miracles this time. Without any of the drama of its injury-time comeback on the last day in 2012, City secured just the fourth title in its history with a comfortable 2-0 victory over West Ham on Sunday. "It was my first season in the Premier League and I had to change a lot of things," said City manager Manuel Pellegrini, who also won the League Cup in March. "It's amazing we are here after just one year."
After an edgy start at the Etihad Stadium, Samir Nasri scored with a shot from outside the area in the 39th minute and Vincent Kompany added the second from close range shortly after the break to let fans celebrate for much of the second half. The win meant Liverpool had no chance of catching up, and finished two points behind in second despite a 2-1 win over Newcastle. It was a stark contrast to two years ago, when Sergio Aguero's 94th-minute goal won the title as City came from behind to beat Queens Park Rangers on the final day and win the title on goal difference. "We are building a club, not just a team," captain Vincent Kompany said. "The past is the past, but surely we have our place in the future. Next year we have to be even better. If we want to be a big club this has to be one of many."

City has spent most of its 134-year history in the shadow of neighbor Manchester United, but has seen its fortunes transformed after being taken over by Abu Dhabi owners who have poured money into the club to turn it into a new power in English football.

This year it wasn't United but another traditional power Liverpool that provided the toughest challenge to the upstarts. A month ago it seemed as if Liverpool would end its 24-year title drought after starting as 33-1 outsiders, but the 18-time champions faltered in the final weeks. Although Daniel Agger and Daniel Sturridge took Liverpool to 101 league goals in Sunday's win over Newcastle, the campaign ended with players embarking on a downbeat lap of appreciation at Anfield. "People have looked at us and asked have they coped with the pressure? I think 12 wins out of 14 shows we clearly have," Liverpool manager Brendan Rodgers said. "For us, it's been a wonderful campaign of growth and development ... and we will improve. We'll be ready to fight again, but now we've got the belief."

Chelsea and Arsenal, though, could return even stronger. Chelsea ended just two points behind Liverpool after beating relegated Cardiff 2-1. Arsenal, which led the standings for longer than any team before the injury-hit squad collapsed, had to settle for fourth place again as it closed out the campaign by winning 2-0 at Norwich. On a final day lacking drama, the only other matter to settle was sixth place, with Tottenham denying Manchester United the final Europa League spot by beating Aston Villa 3-0 as the deposed champions were held to a 1-1 draw at Southampton. It was only a year ago that United won its 20th English title by 11 points ahead of City before Alex Ferguson's retirement.

But City ended this title race 22 points in front of its seventh-place neighbors as United was glad to see its worst-ever Premier League season come to an end.

Ryan Giggs, the 40-year-old United veteran who stepped up to temporarily replace the fired David Moyes last month, is now expected to make way for Louis van Gaal to fill the Old Trafford manager's job. "I think the managerial situation will be sorted out in the next week. (I'll) think of my own position and decide what I am going to do," Giggs said. "Whether to play on or not. Whether to stay on at the staff, what position that is going to be. Whether I take a year off from football."

There could be a series of managerial changes now, with Tim Sherwood set to leave Tottenham after missing out on Champions League qualification, despite signing an 18-month deal in December to replace Andre Villas-Boas. A frantic, energetic figure during his spell on the touchline, the novice manager didn't disappoint at White Hart Lane today.
Last Update: May 13, 2014 2:10 am
RELATED TOPICS