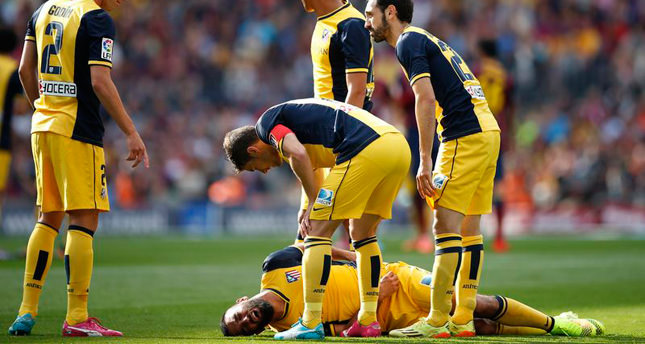 Atletico Madrid clinched their first Spanish league title since 1996 with a dramatic 1-1 draw at second-placed Barcelona Saturday. Arda Turan and Diego Costa are out of the Champions League final due to injury

MADRID — It was Atletico's 10th Liga title and sealed the hard way, with a battling, defiant display in front of 97,000 Barca fans - who sportingly applauded them at the end. The draw was celebrated wildly in Madrid.

Alexis Sanchez gave Barca - who needed to win to defend the title - the lead in the 33rd minute, only for Diego Godin to level for Atletico five minutes into the second half.

Barca's Lionel Messi had what could have been a league-winning goal disallowed for a narrow offside, but Atletico managed to hold out for a memorable draw without too many problems.

"This was grandiose, I am lost for words," said Atletico coach Diego Simeone, who has won four major titles since taking over in 2012.

"Today we had to fight against everything and everyone. I knew the players would not collapse ... It is hard to express this joy. This is one of the most important days in the history of Atletico.

"I was tranquil even when we went behind. It was all uphill but we did it, thanks to a great collective effort."

Goal-scoring hero Godin said: "Justice has been done. To finish ahead of Real and Barcelona is not easy at all."

And captain Gabi said: "I am proud to belong to this great club... It is wonderful to be able to fight against the two big teams, as we have done all year."

Atletico finished the season with 90 points, three ahead of Barca and also three above Real Madrid, who placed third with a 3-1 defeat of Espanyol earlier Saturday.

The only bad news for Atletico was first-half muscle injuries suffered by strikers Diego Costa and Arda Turan, who were both doubtful before the match after missing recent games.

It is not clear if they will be fit for the May 24 Champions League final against neighbours Real.

Barca coach Gerardo Martino, who will almost certainly leave after a disappointing season, raised eyebrows by leaving veteran playmaker Xavi out of his starting lineup.

The injuries to Costa and Turan left Atletico in a state of confusion in the first half, and Barca took advantage to go ahead in the 33th minute when Alexis broke the deadlock with a fierce near-post drive which gave the Camp Nou brief hope.

And in the 50th minute Godin silenced the packed Camp Nou by heading in a corner from Gabi, the latest goal from a corner that the shaky Barca defence has conceded this season.

Apart from Messi's disallowed goal, Atletico had to endure surprisingly few scares, and came close to scoring a second goal themselves.

"We have to congratulate Atletico, they are deserved champions," Barca midfielder Andres Iniesta said.

"They have the best team all season and there is nothing more to say...It has been a disappointing season for us."

Meanwhile, Barca president Josep Maria Bartomeu - who will be under pressure to call elections after a season without trophies - said: "This is not the end of an era, but there will be changes for next season. Some players will not continue here."

Earlier Saturday, Real warmed up for the Champions final with the win over mid-table Espanyol, with young striker Alvaro Morata putting away a late brace.

While warming up before the match, Cristiano Ronaldo suffered a recurrence of the left hamstring injury which has plagued him for the last three weeks, and did not play.

Towards the end, Karim Benzema limped off with a pulled muscle, though Real coach Carlo Ancelotti said both strikers would be fit for the final.

"We did not want to take a risk with Ronaldo, he was not comfortable in the warmup. We think he can play in the final. Benzema has a pulled muscle but he should also be able to play in Lisbon," Ancelotti said.

Benzema set up Gareth Bale to open the scoring in the 65th minute.

Alvaro Morata, who came on for Benzema, made it 2-0 to Real. Pizzi pulled a goal back for Espanyol only for Morate to then make it 3-1.
RELATED TOPICS