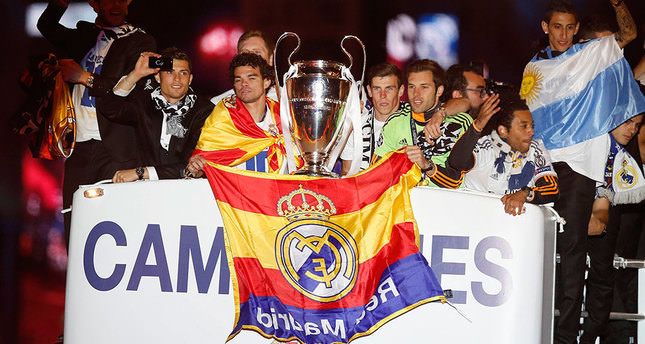 Gareth Bale scored on a header in the 110th minute, Marcelo connected in the 118th and Cristiano Ronaldo capped the spree on a penalty kick.

Atletico was on the brink of victory in regulation time, but Real's Sergio Ramos tied it on a header in the third minute of stoppage time at the end of 90 minutes.

Diego Godin put Atletico ahead when his 35th-minute header looped into the Real goal left vacant by goalkeeper Iker Casillas' rush out.

Atletico — which had to substitute striker Diego Costa early in the first half — simply wore out in extra time, failing to follow up on the Spanish league title it won last weekend.

Had Atletico held on for its first European title, Ronaldo and Bale would have shared the blame for a series of missed chances in the 90 minutes.

Instead, the star forwards — both signed for world-record transfer fees — added to their storied club's history in club soccer's most prestigious competition.

Real coach Carlo Ancelotti also tied the competition record with three victories as a coach, after winning in 2003 and '07 with AC Milan. The Italian is the fifth coach to win with two clubs.

The teams took chances by fielding players below full fitness, and a bruising first half tested their readiness and resolve.

Ronaldo and Bale were both sent tumbling by tough tackles within 3 minutes, and Atletico's Costa was forced out early.

Costa hobbled off after 9 minutes, making it clear that the gamble by coach Diego Simeone to put him in the starting lineup had backfired.

Costa also exited last weekend in a 1-1 draw at Barcelona in the Spanish league decider and received a horse placenta treatment on his right hamstring during the week.

Casillas charged from his line when Juanfran lifted a high ball toward the penalty spot, and was stranded when Godin rose to loop a header toward the empty goal. The ball crossed the goal line before the goalkeeper could swipe it away.

In a second half of increasingly hectic Real attacks, Ronaldo tested Thibaut Courtois with a curling free kick but was off target with a pair of headers.

Bale was guilty of a series of miscued shots with the outside of his left boot, and a handball in the Atletico penalty area that added to Real fans' frustrations.

Atletico was less than 2 minutes from the title when its tough defensive line was finally breached on Ramos' sixth goal in seven games, including two in the semifinal against defending champion Bayern Munich.