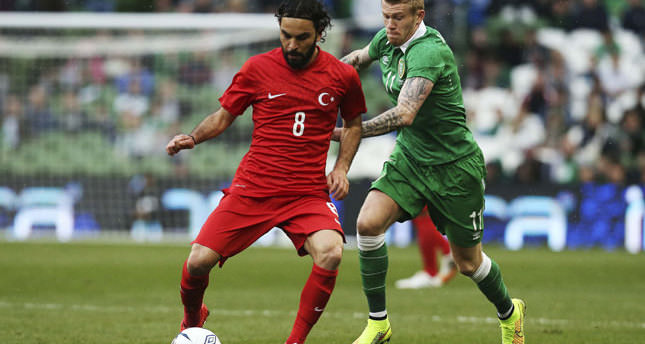 Following their 1-6 demolition of the f ledgling Kosovo national team on Wednesday, the Turkish national team and its young stars once again fought to victory against Ireland, beating their hosts 1-2.

Turkey started the match off playing high momentum attacking football and found the back of the net early in the 16th minute when Özek scored his first ever goal for Turkey with a remarkable low header that glided into the bottom corner after getting behind Gökhan Gönül's cross.

Two minutes later seasoned midfielder and national star Selçuk İnan would have to be taken off with injury in favor of 21-year-old Özyakup.

Turkey would continue to press on until the end of the first half however Fatih Terim had reason for concern as Ireland forced Kıvrak and the Turkish defense into multiple dangerous positions.

Turkey would once again take hold of the game in the second half as Ireland struggled to hold off Turkey's consecutive advances. The short passing midfield possession play would pay off as Turkey doubled their lead in the 75th minute when Özyakup would find Çamdal on the left side of the box.

The Irish national team would go on to score just two minutes later in a similar manner, however they would fail to create any other clear cut chances ending the game in a 1-2 loss at home.

Since being reappointed as the manager of the Turkish national team, Fatih Terim has looked to add new young faces to the squad as many of Turkey's stars have begun to age and an injur y plagued Turkey has suffered to field a consistent and disciplined main 11. The lack of discipline team work and consistency prevented Turkey from participating in the Euro 2012 and the 2014 FIFA World Cup in Brazil, prompting the reinstatement of Terim who is commonly regarded as the countr y's most successful manager.

Since his reinstatement Terim has seen the Turkish national team return to acceptable form as performances have dramatically improved. Terim now looks to rebuild the squad with the plethora of young talent at his disposal to prevent future prolonged periods of national team disappointment.

The Turkish national team will now travel to the United States to take on Honduras at the Robert F. Kennedy Memorial stadium in Washington D.C. on May 30.
RELATED TOPICS