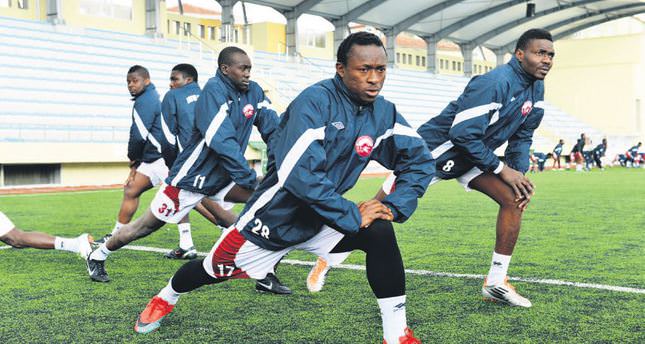 They came with false promises, experienced heart break, but still these young men continue to work toward their dreams of starring in Turkish football

Some Africans who come to Turkey dreaming of football glory fail to make it and are left in limbo. The second African Cup, organized by the Fatih Municipality, will feature teams from Cameroon to Somalia formed by these players.

Coming from all corners of Africa most of these players found themselves here after having their dreams crushed by not being able to transfer to a professional team. Some of these dreamers chasing after the Super League found themselves swindled of what little they had after their long journey while others were never offered the opportunity they were after. Before the tournament started on Sunday, the players from all these countries were allowed the opportunity to practice for four days at the Mimar Sinan Stadium in Fatih. They all share the same dream of playing of a professional football team.

A number of the players are on the African Friendship Sports team, which is made up of 50 youth players who receive instructions from amateur and professional coaches from around the city while some of them end up being transferred to professional clubs. Unwilling to return to their countries because they don't have the financial means to do so, Mustafa Demir, the mayor of the municipality of Fatih created this team to help those within escape from the dark futures that may await them on the streets.

The team is coached by Nigerian manager John Taqwan, who has a history of coaching professional clubs in Nigeria. Taqwan said the African Friendship and Sports team is made up of players who all share the same dream of playing in the Turkish Super League and that they all have their own stories on what lead them to leave their countries.

They found themselves unable to find what they hoped for upon their arrival in Istanbul. Hayrettin Yazıcı, the municipality of Fatih's director of Youth and Sporting, spoke on the issue. "They came to Turkey with big dreams. They came with dreams of becoming footballers, but some of them found themselves abandoned in Beyazıt Square [in Fatih]. They all have different stories. They had already started renting fields from us so that they could play. From time to time they found themselves unable to pay the rental fees.

Mayor Mustafa Demir told us that he wanted them to be able to start using the fields at no cost. We donated their jerseys and cleats to them. There are many of them who came from their countries in Africa. We did not want them to lose their form, because from time to time the staffs of professional football teams come to watch them."