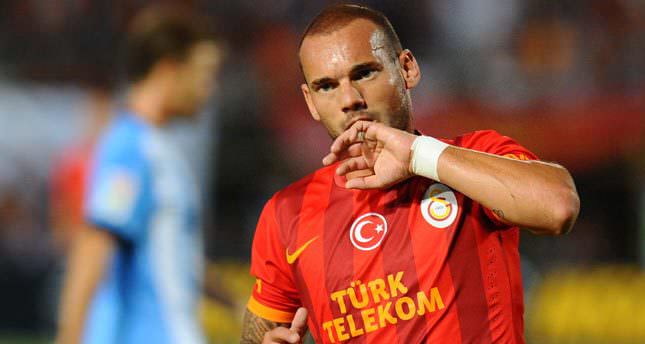 While Turkey will not compete in this edition of the world's biggest soccer event, Turkish fans will be able to see star players from their favorite teams battle for glory

ISTANBUL — A total of 28 football stars in Turkey's Süper Toto Super League will play for their national teams in the 2014 FIFA World Cup which begins this Thursday. Fenerbahçe and Galatasaray will send to the World Cup six foorballers each while Beşiktaş, Torku Konyaspor and Çaykur Rizespor will also send two of their footballers to Brasilia each. Cameroon alone have six footballers who play in Turkey's Super League, including two goalkeepers Charles Itandje from Konya Torkuspor and Sammy N'Djock from Fethiyespor.

Galatasaray's two Cameroonian defensive players Aurelien Chedjou and Dany Nounkeu will also be included in the national team. Eyong Enoh from Antalyaspor will also wear the Cameroonian national team jersey. And Fenerbahçe's Pierre Webo will fight in the forward line for Cameroon. Jerry Akaminko from Eskişehirspor will play for Ghana. The Portuguese national team includes three footballers from Turkey: Bruno Alves and Raul Meireles from Fenerbahçe and Hugo Almeida from Beşiktaş.

Jermaine Jackson who has recently signed with Beşiktaş will play for the U.S. Turkey's Süper League will send six footballers to Bosnia Herzegovina, which might help account for why many in Turkey will be supporting Bosnia Herzegovina in Brazil. Ongjen Vranjes from Elazığspor will lead the defensive line for Bosnia Herzegovina.

Bosnian national team's midfield bloc will almost be formed entirely from Super League's footballers: Haris Medunjanin from Gaziantepspor, Senijad İbriciç from Kayseri Erciyesspor and Izet Havrojiç from Galatasaray. Edin Visca from Istanbul Büyükşehir Belediyespor and Ermin Zec from Gençlerbirliği will play as forward in Bosnia Herzegovina. In Nigeria's national team, there are three footballers who play in Turkey.

Netherland will include two players from Turkey's Super League: Dirk Kuyt from Fenerbahçe and Wesley Sneijder from Galatasaray.
Goalkeeper Fernando Muslera will play for Uruguay in World Cup 2014.
RELATED TOPICS