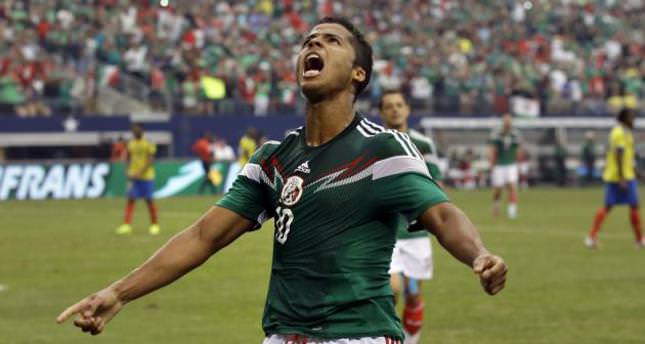 by Associated Press
Jun 13, 2014 12:00 am
Mexico overcame the torrential rain and two disallowed goals to beat Cameroon 1-0 on Friday, picking up the three points it needed to have any chance of advancing from a tough group at the World Cup.

Oribe Peralta scored in the 61st minute, giving Mexico its first win over win over an African team at the World Cup and justifying coach Miguel Herrera's decision to start him ahead of striker Javier "Chicharito" Hernandez, arguably the country's best known player.

He broke the deadlock just as thousands of Mexican fans were cheering for Hernandez to come into the game, swooping in with his left foot after Cameroon goalkeeper Charles Itandje parried Giovanni Dos Santos' attempt from the edge of the area.

Dos Santos twice put the ball in the net in the first half hour, only to have both efforts called back. He was ruled offside in the 11th minute and his header from a corner in the 29th was denied when referee Wilmar Roldan apparently called a foul in front of Itandje.

"We could have scored more, but unfortunately we're not used to these conditions," Herrera said. "Frankly, the refereeing took away two clear goals, but at the end of the day you've got to work for it, and we get to the next match with three points and very high spirits."

Tournament host and favorite Brazil leads the group after a 3-1 win over Croatia in the opening game.

While the heat was expected to be an issue in this balmy coastal city, rain soaked the field starting about four hours before the match and never let up, creating a cool day but a slick surface. The conditions didn't dampen the spirits of thousands of Mexico fans, who dominated the crowd and kept up boisterous chants and taunts throughout the match.

Cameroon seldom tested Mexico goalkeeper Guillermo Ochoa, but forced him to make a victory-clinching save when he dived to his left to stop an header by Benjamin Moukandjo.

The save was yet another big payoff for Herrera, who started Ochoa after the 'keeper had been a reserve at the last two World Cups.

At the final whistle, Herrera kneeled, crossed himself and pumped his right fist. Cameroon coach Volker Finke stood with his arms crossed, scowling as the rain dripped off his face.

For the Cameroon players, the match was a chance to put behind them a bonus pay dispute that created so much turmoil back home and delayed their arrival in Brazil. But the loss and lackluster performance will only magnify the perception that the Indomitable Lions are a fractured team.