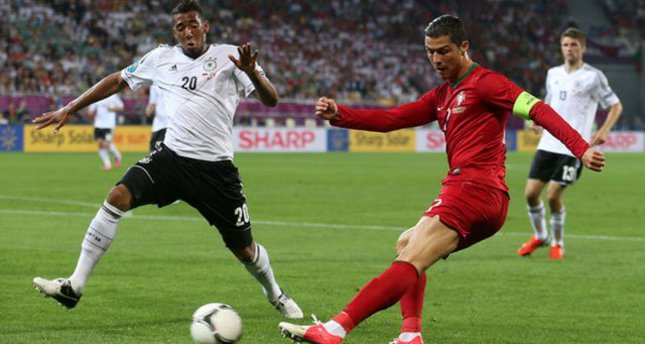 by Jun 16, 2014 12:00 am
Germany versus Portugal was supposed to be a close battle for supremacy in Group G, but the Germans used their high-octane offence to steamroll their way to a 4-0 victory on Monday.
Germany's Thomas Mueller won the 2010 World Cup scoring crown with five goals in South Africa and started Brazil 2014 with a hat-trick
goals in Germany's blowout of Portugal, who played the final 53 minutes a man down.
Mats Hummels also scored for the three-time champions while Portuguese superstar Cristiano Ronaldo was often shown shaking his
head in disbelief of the beating his team was taking.
Germany continued their impressive record in World Cup openers, having won their kick-off at every finals since 1990.
With German coach Joachim Loew using six centre midfielders in his line-up, the match at Arena Fonte Nova in Salvador was high-tempo
from the very start.
Neither team showed nerves early on and went right at the opposing goal.
Ronaldo got the crowd excited in the eighth minute after the German defence lost a ball but keeper Manuel Neuer made a superb save. A
minute later, German defensive midfielder Sami Khedira fired just wide of an empty goal after a keeper mistake.
The crowd got their early goal with Germany grabbing the lead from the spot in the 12th minute. Mueller converted into the lower left corner after Joao Pereira had dragged down Mario Goetze in the box to set up the spot kick.
Portugal were not fazed by falling behind but the Iberians' attack took a hit in the 28th minute when Portugal coach Paulo Bento was forced to swap an injured Hugo Almeida for Eder.
And Germany doubled their lead on a set piece after 32 minutes with Hummels hammering home a header off a corner by Toni Kroos.
Eder's header went just over the bar in the 36th minute but Portugal then found themselves a man down just a minute later.
Pepe was shown a red card for butting heads with Mueller, who was sitting on the ground after being hit in the face seconds earlier by
the Portuguese defender during a challenge.
Mueller continued his monster game in first half injury time, blocking Bruno Alves' clearance attempt and then blasting home his second goal.
Being a man up, Germany took their pedal off the gas in the second half while Portugal didn't have the power to create many dangerous
chances.
Portugal thought they deserved a penalty in the 75th minute as German defender Benedikt Hoewedes was clumsy in his challenge against Eder in the area. But referee Milorad Mazic did not point to the spot.
Mueller then completed his hat-trick in the 78th minute, pouncing on a rebound of a blocked shot by Andre Schuerrle.
With the decision long decided, but sides saw important defenders get subbed out with injuries as Portugal's Fabio Coentrao was stretchered off the pitch in the 65th minute and Hummels was helped off with 17 minutes to play.
Last Update: Jun 16, 2014 9:07 pm
RELATED TOPICS