Algeria eyeing revenge on Germany for 1982 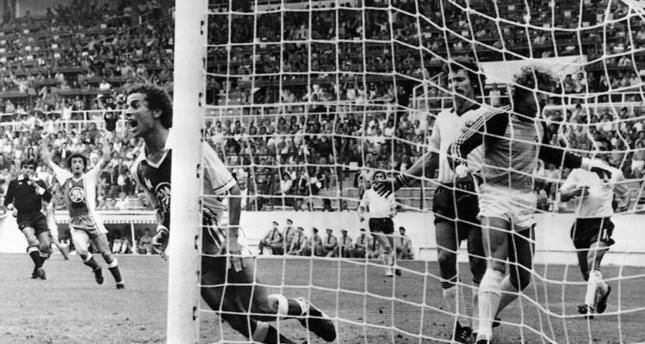 Thirty-two years ago, West Germany and Austria played a match that guaranteed their advancement in the World Cup and Algeria's elimination. Germany and Algeria are set to face off in this year's World Cup among lingering match-fixing allegations

It was back in 1982 that Germany and Austria played out what went down in the history books as the "Disgrace of Gijon" to eliminate Algeria from the World Cup in which West Germany defeated Austria 1-0 in a lackluster match. Today in Porto Alegre, Algeria faces Germany for the first time since that infamous match, with a spot in the quarterfinals on the line. On paper, this match should be no contest. Germany is a three-time champion with top-quality players in every position while Algeria has advanced past the opening round for the first time. Add in the revenge and momentum elements, and this could become one of the most emotionally charged matches of the round of 16. "At a World Cup, there are no desirable opponents and no easy opponents, especially not in the knockout matches," Joachim Loew, Germany's coach said. It is clear he is fed up with analogies drawn between the 1982 World Cup when West Germany lost to Algeria.

Noting that most of his players were not even born 32 years ago, Loew said it was also absurd to use terms like "revenge" and "vengeance" for a match between two teams who have not met since that game at the finals in Gijon, Spain.

However, Algeria's Bosnian coach Vahid Halilhodzic said, "We have not forgotten. Everybody has been talking about Algeria and Germany from 1982." It is certainly a topic motivating the media. That match on June 25, 1982 was probably the darkest hour in the 104-year history of the German FA (DFB) and is still referred to as the 'Schande von Gijon' ('Disgrace of Gijon') or the 'Gijon non-aggression pact' in [CT1] Germany and Austria.

Algeria upset West Germany in their first group match 2-1, but lost to Austria 2-0 and then beat Chile 3-2 on June 24. West Germany knew a 1-0 win over Austria in their final group match the next day would enable them and their opponents to advance to the second round while eliminating Algeria.

That is exactly what happened. Horst Hrubesch scored in the 10th minute and the rest of the match was a soulless kick-about in which neither team looked like they were attempting to score. Fans in the stadium burned bank notes and shouted "rigged." Television commentators in West Germany and Austria condemned the play and even urged viewers to turn their televisions off. Among the players on the pitch for West Germany that day were Karl-Heinz Rummenigge, Paul Breitner and Felix Magath. Wolfgang Niersbach, the German DFB president sitting next to Loew on Saturday, was at that infamous match as a journalist. He said West German reporters had found it strange and embarrassing but added that the players denied there was any pre-match agreement. "I talked to the players and they said there was no agreement," Niersbach said. "They said that it just evolved out of the situation during the course of the match.

There was an error in the [scheduling] system before that match," he said, adding that after that game FIFA changed the schedule and since then the final group matches have been played simultaneously. "FIFA corrected the error in the system."
Last Update: Jul 01, 2014 12:17 am
RELATED TOPICS