Luis Suarez kicked out of World Cup for biting incident 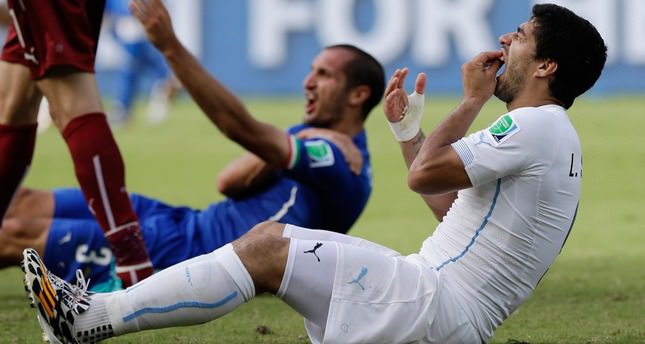 by Jun 26, 2014 12:00 am
Uruguay star Luis Suarez was suspended for nine matches for biting an opponent on Thursday as World Cup chiefs struck back with the heaviest sanction against a player in the tournament's history.

Suarez, who sank his teeth into Italian defender Giorgio Chiellini during his team's Group D win on Tuesday, was also banned from all football activity for four months and fined 100,000 Swiss francs ($112,000).

"Such behaviour cannot be tolerated on any football pitch, and in particular not at a FIFA World Cup when the eyes of millions of people are on the stars on the field," FIFA Disciplinary Committee chief Claudio Sulser said.

The Suarez suspension takes effect immediately and he will not be able to play in Uruguay's second round match against Colombia on Saturday in Rio de Janeiro, even if he appeals.

The four month ban from football activity means he will also be prevented from entering the stadium for Saturday's game. It will also hit his club career with Liverpool in England's Premier League.

The sanction was the toughest ever handed down for foul play at a World Cup, surpassing the eight-match ban against Italy's Mauro Tassotti in 1994 for an elbowing incident which broke the nose of Spain's Luis Enrique.

It is the third time Liverpool star Suarez has been banned for biting players following incidents in 2010 in the Dutch league and 2013 in England.

"The Disciplinary Committee took into account all the factors of the case and the degree of Mr Suarez's guilt in accordance with the relevant provisions of the Code," Sulser said in a statement.

Uruguay football officials had argued against a ban, insisting Suarez had not bitten anyone and claiming the player was the victim of a media witch-hunt.

Uruguayan President Jose Mujica had led the defence of the 27-year-old, telling reporters on Wednesday: "I did not see him bite anyone."

But the speed and severity of FIFA's punishment reflected the widespread revulsion throughout the football world at an incident which was captured clearly on television footage.

There was also photographic evidence of Chiellini's bite mark that he tried to show the referee immediately following the incident. Chiellini himself told Italian television: "He bit me, it's clear, I still have the mark." Suarez sought to play down the incident in comments to Uruguayan television, claiming Chiellini had barged him. "There are things that happen on the pitch and you should not make such a big deal out of them," Suarez said.

FIFA had faced mounting calls to issue a heavy sanction given Suarez's previous disciplinary history. Sponsors had also signalled dismay. Online gambling firm 888poker said it was "reviewing" its relationship with the player. "We will not tolerate unsporting behaviour," the enterprise said.

Although many in Uruguay believe that Suarez is being unfairly persecuted, an exception was ageing national hero Alcides Ghiggia, who scored Uruguay's World Cup-winning goal against Brazil in the 1950 tournament.

"This boy's clearly not right in the head. That's just not something you do on the pitch,' said Ghiggia.

The suspensiojn came one day after the Ghana government said it was airlifting $3 million (2.2m euros) to Brazil to resolve a financial dispute with players, who boycotted training on Monday in protest.

On the pitch, Germany and the United States were due to play in Recife, with both teams needing only a draw to progress from Group G.

That result would see Portugal and Ghana eliminated from the tournament.

In later games Belgium will aim to clinch first place in Group H when they play South Korea while Algeria will attempt to reach the last 16 for the first time when they face Russia.