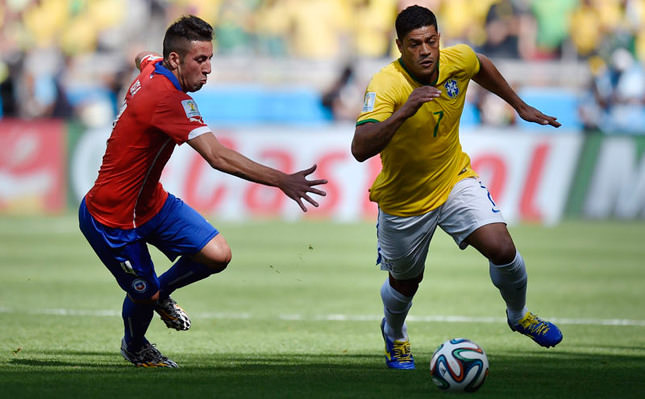 by Jun 29, 2014 12:00 am
Belo Horizonte, Brazil (dpa) - Hosts Brazil moved a step closer to their goal of a sixth World Cup title, defeating Chile 3-2 in a dramatic penalty shoot-out Saturday to advance to the quarter-finals.

Julio Cesar was the hero for Brazil, saving two penalties after the scores were level 1-1 at the end of extra-time.

The defeat was a bitter blow to Chile, who been hoping to make it to the final eight for the first time since they hosted the World Cup in 1962.

Brazil's opponents in the quarter-finals will be decided in the encounter between Colombia and Uruguay in Rio de Janeiro later Saturday.

David Luiz, Marcello and Neymar converted their spot kicks for Brazil, with Charles Aranguiz and Marcelo Diaz finding the back of the net for Chile.

Chile's first two efforts were stopped by the Brazilian keeper, who was named man-of-the match. Willian and Hulk missed their shots, but Neymar restored Brazil's lead with what turned out to be the 3-2 winner as Gonzalo Diaz blasted Chile's final kick against the inside of the post, sending the stadium into raptures.

"It was a special day for all of us," said Brazilian midfielder Luiz Gustavo. "It is the first World Cup for many of the team and it's like a dream. We can now take a breather and concentrate on the task ahead."

Chile captain Antonio Bravo said: "We should feel proud. We are leaving with our heads up high. "We got the most difficult teams in the tournament. We came close to settling the match earlier, but we didn't manage. We felt that we could win it," he said.

"It was psychologically and emotionally a complicated game. The pressure was very great," Julio Cesar said. "Although we played a good first half, after the first goal we ran into difficulties,"

Brazil went into the game as favourites but came within inches of being eliminated. Just sconds before the game went into the penalty shoot-out Chile substitute Mauricio Pinilla fired a blistering shot that thundered against the Brazilian crossbar.

It would have been one of the biggest sensations of World Cup history but Brazil live to fight another day.

They had started the match well and deservedly took the lead on 18 minutes when Thiago Silva flicked on Neymar's corner and a combination of David Luiz and Jara turned the ball into the net.

Fourteen minutes later Chile were level. Eduardo Vargas pounced on a poor throw-in from Marcello as Hulk hesitated and fed the ball to Sanchez. The Barcelona striker bore down on goal and fired a right-foot shot past the outstretched arm of the Cesar.

Brazil responded with a header from Neymar that went narrowly over the bar, and another from Fred after some good work from Brazil's star player.

Chilean keeper Bravo was one of the busiest men on the pitch, tipping a powerful shot from Dani Alves over the bar and punching away a curving cross from Fred.

Brazil had a goal disallowed 10 minutes into the second half when referee Howard Webb adjudged Hulk to have controlled the ball with his upper arm before finding the far corner of the net. Hulk was yellow-carded for the infringement.

Chile coach Jorge Sampaoli urged his players to show courage against Brazil and they did just that, fighting for every ball and creating good opportunities.

As Chile gained in confidence, Mauricio Isla played a superb pass to Arturo Vidal whose fierce shot from close-range was brilliantly saved by Julio Cesar.

Substitute Jo replaced Fred and the new striker should have done better than to slide past a cross from Hulk just metres from the goalline.

Neymar placed a header directly at the keeper and Brave also saved following a powerful shot after a jinking run from the lively Hulk.

Brazil had a good chance at the start of extra-time when a shot from Jo was blocked by a Chilean defender.

But there was no further scoring and Brazil progressed as Chile were left to rue the width of the crossbar denying Pinilla.