Huntelaar comes to the rescue of the Dutch against Mexico 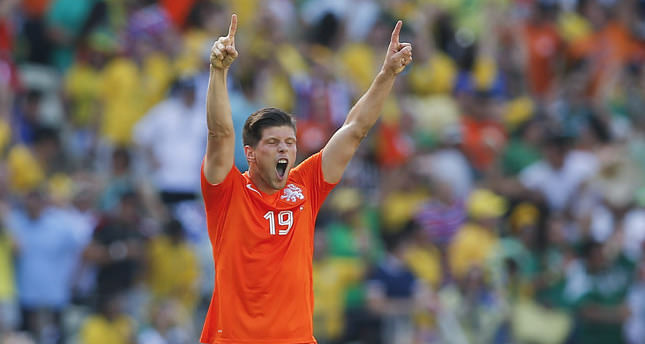 by Jun 29, 2014 12:00 am
Klaas-Jan Huntelaar came on with 16 minutes left for Robin van Persie Sunday, and seven touches of the ball later he was the Dutch World Cup hero.

The Schalke striker, who had not played before in Brazil, set up Wesley Sneijder's 88th minute equalizer, and then converted a stoppage time penalty as the Netherlands reached the quarter-finals with an improbable 2-1 comeback against Mexico in Fortaleza.

"This is what you wait for. That's what you dream of when you come on late. It is simply fantastic when it works out," Huntelaar said.

"I missed my last penalty so there was pressure. The next one is always difficult but it went in. Simply fantastic."

FIFA statistics said Huntelaar got the ball seven times in his short appearance, the final one being the penalty which he calmly converted into the low left corner past man of the match Guillermo Ochoa.

"Yesss @KJ_Huntelaar saved us! What an end of a game!" tweeted Gregory van der Wiel, who had not made the Dutch squad for injury reasons.

Huntelaar was embraced by team-mates and coach Louis van Gaal, who later named him "damn cool" while van Persie spoke of an "unbelievable" result for a quarter-final date against Greece or Costa Rica on Saturday.

Huntelaar, 30, is a formidable marksman. But he has not been a first-choice player in the Dutch team for several years, such as at Euro 2012, despite being the leading scorer in the qualifying campaign and in the Bundesliga 2011-12,

Manchester United's van Persie and Bayern Munich's Arjen Robben have been preferred up front, and in Brazil as well, with Huntelaar coming off an injury-ridden German season.

Both duly scored three goals each in Brazil during group stage wins over holders Spain (5-1), Australia (3-2) and Chile (2-0), and Huntelaar was not even fielded when van Persie was suspended against Chile.

However, he finally got his chance Sunday in the 74th minute in steamy Fortaleza. With time running out, he nodded the ball back to the edge of the area for Galatasaray's Sneijder to drive home the equalizer.

Huntelaar's introduction had been momentarily delayed as he disappeared into the changing room just before coming on. He later explained to German station ARD, he drank so much liquid in preparation, he had to make a last-gasp visit to the toilet.

The game seemed to heading to extra-time despite six minutes added on, three of them for a cooling break shortly after Huntelaar's arrival, but the Dutch were not in the mood for another 30 minutes.

Robben stormed into the area, rounded one defender, and was then adjudged to be brought down by Mexican captain Rafa Marquez.

Robben, who famously missed a spot kick in the 2012 Champions League final and a huge chance in the 2010 World Cup final en route to losing both, took the ball but then handed it over to Huntelaar.

"Arjen had the ball and asked whether I wanted to kick. And then I had it. It was pure adrenaline, the best drug there is," Huntelaar said.