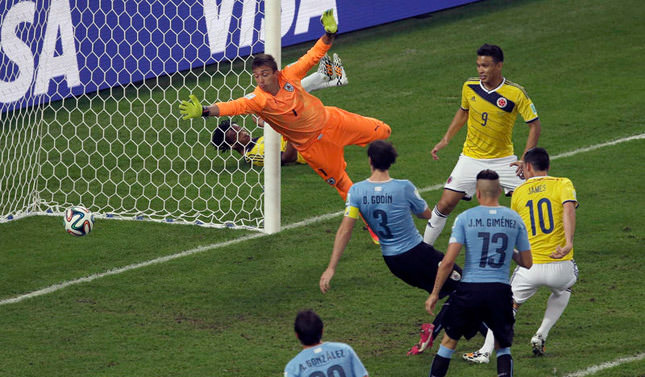 by Jun 29, 2014 12:00 am
James Rodriguez struck two more World Cup goals as Colombia downed Uruguay 2-0 at the Maracana stadium Saturday to set up a quarter-final meeting with hosts Brazil.

The goals in each half take Rodriguez to five in four games to make the 22-year-old Monaco striker the tournament's leading scorer and put Colombia into the last eight for the first time.

Rodriguez's first in the 28th minute was a stunning left-foot volley from outside the box, while he finished from close range five minutes after the break after a well-worked move.

It spelled the end of the tournament for a Uruguay side that had beaten England and Italy but now join their banned striker Luis Suarez back home.

All the talk beforehand was of Suarez whose absence following his lengthy biting ban had overshadowed the game.

Now the limelight falls on man-of-the-match Rodriguez - a 45-million-euro (61-million-dollar) signing from Porto last season - as Colombia chalked up a fourth successive win at the tournament.

The striker has scored in all four games - the first to do so since Ronaldo and Rivaldo for Brazil in 2002 - and goes ahead of Argentina's Lionel Messi, Brazil's Neymar and Germany's Thomas Mueller in the scorers' charts.

His first goal may well be the best of the tournament. Taking the ball on his chest, he turned some 25 metres out to strike the ball with his left foot in off the underside of the bar.

The second was more prosaic but just as pleasing after Juan Cuadrado headed a cross from the left from Pablo Armero into the centre and Rodriguez swept the ball home from the edge of the six-yard box.

"Congratulations to all the Colombian people," the team's Argentinian coach Jose Pekerman said.

"Colombia's people deserved it and I'm happy to have been at the helm. We knew who we faced. Uruguay are a very tough team, but all the work has paid off."

As expected veteran Uruguay striker Diego Forlan came in for Suarez against a Colombia side unbeaten in their last 10 games - since losing to La Celeste win Montevideo back in September 2013.

Forlan was industrious, often dropping deep to link play, with Edinson Cavani prowling ahead, but Uruguay - returning to the Maracana, the scene of their greatest triumph, a 2-1 win over Brazil in the final game of the 1950 World Cup - could not match Colombia for enterprise.

Cavani had a shot blocked after he delayed an opportunity to shoot first time, and Alvaro Gonzalez saw an effort parried by keeper David Ospina - although Cavani was ruled offside - as Uruguay responded well to going behind.

But one sensed there was no coming back after Los Cafeteros grabbed their second shortly after the break.

Uruguay increased the pressure but the absence of Suarez proved telling in the end as Oscar Tabarez's side failed to find the goal they needed to get back into the game.

Ospina was kept busy saving from Christian Rodriguez, Maxi Pereira and Cavani but Colombia succeeded in running down the clock for a famous victory.

"We weren't surprised," Taberez said of the Colombians.

"We knew Colombia are a very good team. They have very good collective possession of the ball and very good players who make a great contribution."

Pekerman's side now travels to Fortaleza to take on Brazil - penalty shoot-out winners earlier over Chile - and on the evidence of this display have justified hopes of continuing their run into the last four.