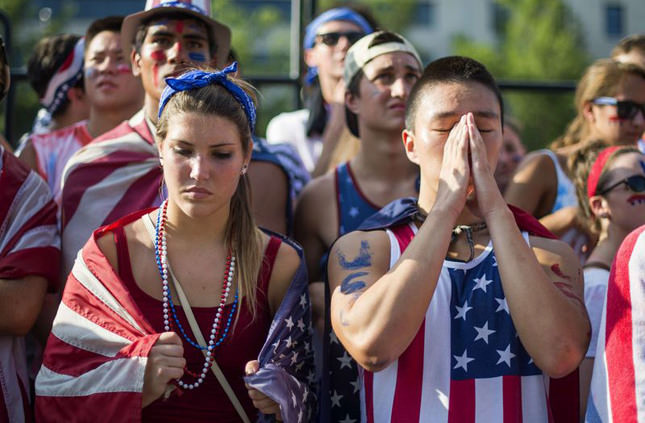 by Jul 02, 2014 12:00 am
Kevin de Bruyne and substitute Romelu Lukaku hit extra-time goals to give Belgium a 2-1 victory over the United States and set up a World Cup quarter-final meeting with Argentina in Brasilia on Saturday.

Tim Howard in goal had kept the United States in the game with a series of fine saves, but the Everton keeper was beaten in the third and 15th minutes of the extra period before substitute Julian Green pulled one back.

Belgium created the greater chances throughout the game and it was almost one-way traffic in the second half, but time and again Howard was in the way to take the game to extra-time in Salvador's Arena Fonte Nova.

But as in Belgium's group games, it was a substitute who proved decisive. Lukaku came off the bench and with his first touch shrugged off the challenge of Matt Besler on the right.

His cross after a powerful run into the area fell to Wolfsburg midfielder de Bruyne who turned and beat the diving Howard with an angled shot. De Bruyne then fed Lukaku as Belgium broke and the striker - on loan last season to Everton from Chelsea - beat his club team-mate with a firm shot.

Green came off the bench for the second extra-time period to hit a Michael Bradley pass first time into goal to set up a thrilling closing spell.

Clint Dempsey was thwarted by Thibaut Courtois in goal from a cleverly-worked free-kick as the US fought hard for a second but Belgium were not to be denied.

Belgium's substitutions have proved decisive in this World Cup so far, and when Lukaku came on for the extra 30 minutes, replacing Lille's 19-year-old striker Divock Origi, who started for the first time at the World Cup, one sensed it could again be a game changer.

Origi had almost given Belgium the perfect start when through with a shot after just 40 seconds which Howard in goal kept out with his leg.

It turned out to be the story of the game, Belgium created chances only to see Howard stop everything thrown at him. De Bruyne dragged a shot wide after the US were backtracking when Graham Zusi lost possession in midfield. And with many of the Belgium moves coming down the left, DaMarcus Berasley did well to clear a Jan Vertonghen cross with Maroune Fellaini lurking.

US coach Jergen Klinsmann had to replace Fabian Johnson with DeAndre Yedlin after the Hoffenheim player pulled up with a muscle injury. It led to a better spell for the US, with the pacey Yedlin taking advantage of the space vacated by Vertonghen to get forward on the right.

Howard was in action straight after the break, tipping a Mertens header over the bar, while Origi missed a splendid chance on 54 minutes when he failed to get a foot to Vertonghen's cross in front of goal.

Minutes later Origi's header dropped onto the top of the bar, Howard saved from Vertonghen and the Tottenham defender risked a volley which cleared the bar.

Origi was proving a handful and beat three men inside the penalty area before sending in a low cross which Dries Mertens flicked into the side-netting.

Kevin Mirallas came on for Mertens on the hour as Belgium kept probing and another glorious chance fell for Origi who could only sidefoot at Howard when the ball fell to him after De Bruyne ran straight at the heart of the US defence.

Dempsey had a couple of potshots straight at Courtois but Howard again came to the rescue when he deflected wide from Mirallas after neat work by Origi, reacted quickly to parry a Hazard drive and tipped a blistering Origi shot over the bar.

Wilmots had kept Lukaku on the bench but decided fresh impetus would be needed for extra-time, and the move paid off with his strong run down the right and cross.

Lukaku's second goal appeared to have wrapped the game up, and Howard was kept busy stopping Lukaku again and Eden Hazard to prevent a third. But the US gave themselves a chance with Green's goal in the 107th minute, and in a battling closing spell came close to taking the match to penalties.
Last Update: Jul 02, 2014 1:56 am
RELATED TOPICS