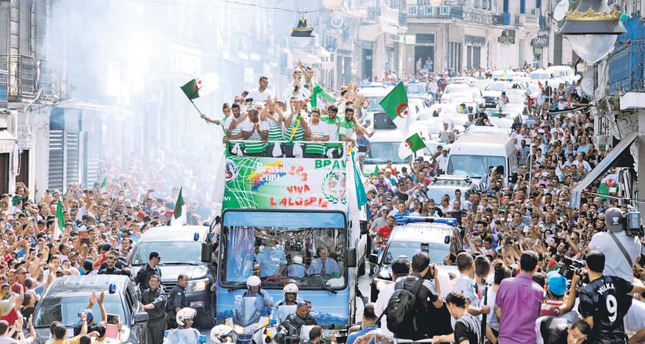 Algeria forward Islam Slimani has revealed that he and his team-mates are donating their $9 million money to people at Gaza. Slimani, who plays for Sporting Lisbon, said, "They need it more than us"

While African nations Ghana and Cameroon were involved in high-profile money disputes over their World Cup participation, Algeria have announced that they're planning on putting their World Cup cash to good use. Algeria won over a lot of new fans with a spirited World Cup that saw them advance into the round of 16 for the first time in the country's history and fought valiantly to an extra-time defeat against the highly favored Germany. Now they'll have even more fans, as forward Islam Slimani announced in the aftermath of the tournament that the entire squad will donate all of their prize money to the people of embattled Gaza.

According to quotes attributed to Algeria's star striker Islam Slimani, the team will give up all of the estimated $9 million (TL19 million) they received as valiant losers in the round of 16. Though Slimani himself plays for Sporting Lisbon and is touted for an even bigger move this summer, the reported donation will be a greater sacrifice for members of the squad based at more modest clubs in Algeria, Tunisia, the lower French leagues and Watford.

Yet according to the Jordanian football writer Waleed Abu Nada, Slimani said, "They need it more than us." The Algerian team had already won support from around the world for their gutsy and creative performances throughout the tournament against more favoured nations. They reached the knockout stages for the first time in their history when a second-half Slimani goal saw them go through against Russia - and at Russia's expense. And they were actually the better side for large parts of their second round match against giants Germany, only losing after extra time 2-1. World Cup prize money - which ranges in Brazil from $8 million for being knocked out in the group stage to $35 million for winning the title - is normally paid after the tournament. With such a sacrifice, Algeria has set a model for the other African teams embroiling with money and match-fixing scandals.

Ghana's national team players allegedly threatened their football association to boycott the World Cup group matches if they did not receive their bonuses. The demands to receive their money ahead of the decisive final group game against Portugal forced Ghanaian authorities to fly the stacks of cash in on a chartered plane. So, Ghana is planning to take pre-emptive action for the next World Cup to avoid offthe- field problems over bonus payments. The country's football association said Wednesday it will have contracts with players for their bonuses at future tournaments.

The decision follows a series of pay disputes involving African teams at the World Cup in Brazil. Cameroon and Nigeria players also argued with their federations and threatened to strike unless they were paid immediately instead of waiting until after the tournament. Cameroon's squad refused to even get on their plane for Brazil before the tournament started until their bonuses were improved and guaranteed, and Nigeria missed a training session as they demanded their payments for qualifying for the second round of the tournament before they played France.

Following the Ghana problems, FIFA secretary general Jerome Valcke said that FIFA would now look at becoming involved to ensure teams have bonus agreements in place well before the start of future World Cups. In the meantime Cameroon's football federation is investigating allegations of match-fixing by its players at the World Cup after it emerged a convicted fraudster correctly predicted they'd lose 4-0 and have a man sent off against Croatia. The governing body (FECAFOOT) released a statement confirming that their ethics committee was probing claims of 'fraud' by 'seven bad apples' in the country's three Group A matches, particularly the Croatia defeat on June 18 in Manaus. Allegations were made in a German news magazine Der Spiegel by convicted match fixer Wilson Raj Perumal from Singapore.