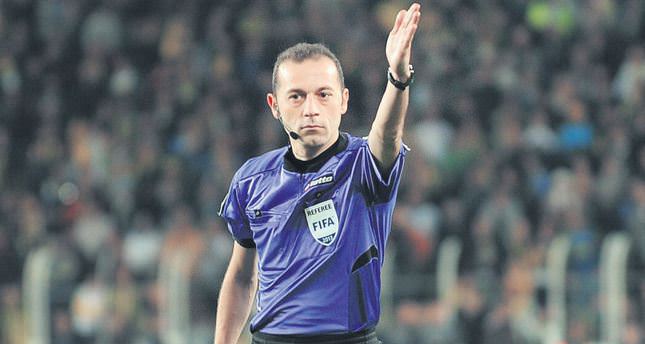 For the first time in history, a Turkish referee will take charge of a World Cup semi-final match. FIFA's Refereeing Department has chosen Cüneyt Çakır and his team to referee today's semifinal between the Netherlands and Argentina

And what was expected has happened. Turkish referee Cüneyt Çakır has been assigned to tonght's World Cup semi-final and in doing so has made Turkish footballing history. Çakır will take charge of the game between the Netherlands and Argentina in Sao Paulo while Jonas Eriksson and Mathias Klasenius have been selected as fourth and fifth official respectively.

Çakır has taken charge of two games at the tournament so far, Brazil's goalless Group A game with Mexico and Algeria's 1-1 draw with Russia. In those games he flashed nine yellow cards but did not send off a single player. Starting his international career in 2006, Çakır was selected for EURO 2012 where he also officiated a semifinal. His other highlight was to referee two matches at the FIFA Club World Cup 2012, including the final between Corinthians and Chelsea.

In 2013, Çakır handled Ukraine-France in the World Cup preliminary play-offs. Çakır, 37, is the second Turkish referee to participate in the FIFA World Cup 40 years after Dogan Babacan officiated at Germany 1974.Çakır averages 4.11 yellow cards per game, 0.21 red cards per game and 0.27 penalties per game.

The International Federation of Football History and Statistics (IFFHS) named Çakır as the fifth best referee in the world. "He has been a professional referee since 2006. He is the one who conducts the most important matches in Turkey. He has a strong personality. He has an insurance company. He is fond of his family and likes to go out for a dinner with them. He reads Stephen King and listens rock music," said a member of the Argentinean press.

However, the English press criticized Çakır's assignment. The Daily Mail wrote, "Robin van Persie will come face to face with the referee he once labelled as 'unknown' in the Netherland's semi-final clash with Argentina. Cüneyt Çakır will take charge of the game in Sao Paulo and Dutch striker Van Persie has criticised the referee in the past. Çakır sent off Van Persie's Manchester United team-mate Nani in a Champions League defeat to Real Madrid in 2013 and the Dutchman was far from impressed with the decision." Separately, the Argentinean media calculated that it has been 8,771 days since they last played in a World Cup semi-final. This match falls on July9, which just so happens to be Independence Day in Argentina, and excitement back home will be at fever pitch knowing that they could be facing arch enemies Brazil in Sunday's final.

Further inspiration to win has been provided by the sad passing of legendary Argentina-born forward Alfredo Di Stefano this week. Their previous World Cup encounters with the Netherlands have provided some epic moments in the tournament's history that will hopefully be repeated in Sao Paulo. Their first meeting in 1974 saw the Dutch win 4-0 with an astonishing display of "total football," before Argentina got revenge in thrilling style in the final on home soil four years later. Dennis Bergkamp provided another magic moment with his memorable control and finish for the Oranje in 1998, before their last meeting lacked a similar spark - a dull 0-0 draw in 2006.

Dutch coach Louis Van Gaal seems to be putting on a personal showcase of his tactical genius at this World Cup that must have Manchester United fans rubbing their hands with glee. His game-changing decisions have been the difference as they have struggled to match their stunning start to the tournament with that incredible win over Spain.

Few would have predicted they would be one game away from reaching a second successive final, but Van Gaal's unorthodox and inspired decision to bring on goalkeeper Tim Krul for the penalty shootout with Costa Rica increased his reputation as football's master tactician. "He is proving it in this tournament and he has shown what tactical qualities he has," said an admiring and grateful Krul.