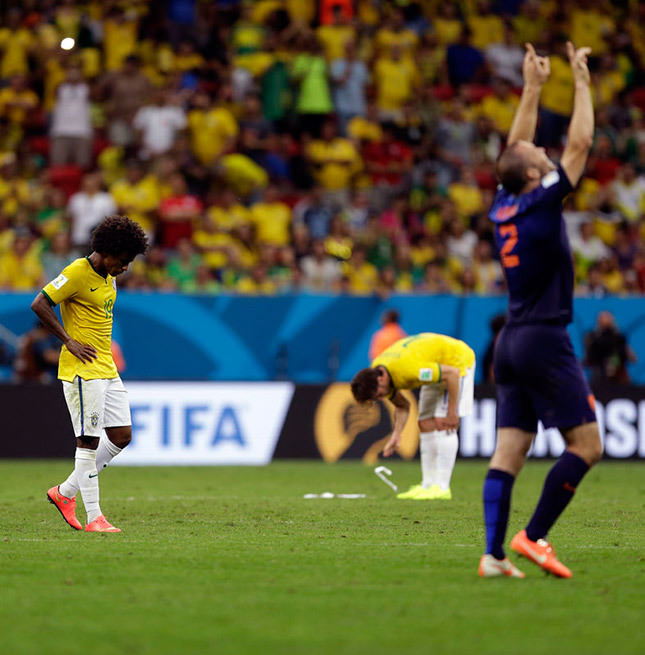 by Jul 13, 2014 12:00 am
The Netherlands clinched third place in the 2014 World Cup with a 3-0 crushing of Brazil Saturday, adding to the hosts' miserable finale to the tournament.

After their worst-ever World Cup defeat - a 7-1 drubbing against Germany in the semi-finals - a still shell-shocked Brazil side could not salvage the country's pride at Brasilia's Estadio Nacional, conceding two goals inside 17 minutes.

This is the first time that the Dutch have ended a World Cup in third place, having lost the 1974, 1978 and 2010 finals and in their only other battle for third place, against Croatia in 1998.

"Compliments to the team," said Arjen Robben said in a television interview. "It's a pleasure to play with them. We have really deserved this third place."

Hosts Brazil, in contrast, leave the tournament with their tails between their legs, having failed to win a World Cup on home soil for a second time and with a campaign that will always be remembered for their semi-final humiliation in Belo Horizonte.

"It is a horrible feeling, I don't know what to say. We suffered a great defeat that no one would have expected against Germany, and today we failed in our effort to clinch third place," said Brazilian midfielder Oscar.

Brazil welcomed back captain Thiago Silva, who was sorely missed against Germany, but dropped left-back Marcelo and out-of-favour Fred, fielding Jo up front instead.

Louis Van Gaal had to do without creative midfielder Wesley Sneijder, who picked up an injury warming up, and Nigel de Jong, replacing the pair with Jonathan De Guzman and Jordy Clasie.

Brazilian star Neymar joined his team-mates on the bench, despite being unable to play after fracturing a vertebra in the quarter-final against Colombia.

Despite there being little to play for, Luiz Felipe Scolari had insisted before the game that his Brazil players should go out and "honour the national team jersey."

But despite encouragement from the stands, the hosts never looked like having a clear game plan and suffered a nightmare start to the match.

In the first Dutch attack, Robben was served a wonderful deep ball from Van Persie and made a run for goal, only to be brought down by Thiago Silva. Algerian referee Djamel Haimoudi awarded a penalty and yellow card, despite the fact the Brazilian captain could have been dismissed for denying a clear opportunity at goal.

In any event, captain Van Persie put the Dutch in front after just three minutes of play with a well-taken penalty to score his fourth goal of the tournament.

Less than a quarter of an hour later David Luiz, who had been singled out as one of the worst Brazilian players against Germany, made another error. His poor clearance set up Blind, who had plenty of time to beat goalkeeper Julio Cesar with a comfortable finish from the centre of the area.

Still mindful of their semi-final drubbing, Brazil struggled to make an impact, although they came close in the 38th only for Paulinho and David Luiz to narrowly fail to connect with the ball following a flick by Luis Gustavo.

The end of the first half was greeted by jeers and boos from the crowd.

Scolari replaced Luiz Gustavo with Manchester City's Fernandinho and also brought in Hernanes for Paulinho after the break, but it was the Dutch who continued to look the more threatening side, with Robben a constant thorn on Brazil's right flank.

The well-organized Dutch side were rarely threatened and added a third goal during injury time when Wijnaldum fired home a cross from Daryl Janmaat's cross.

Brazil entered the World Cup knowing that nothing less than a sixth title would satisfy the fans. Instead, they ended the campaign conceding a record number of goals - 14 - and their first consecutive home defeats since 1940.

For Van Gaal, it was a fitting final game at the helm of the Dutch team. The master tactician has already signed a contract with Manchester United and can join the English club claiming that - excluding the penalty shoot-out against Argentina - his team left Brazil undefeated.