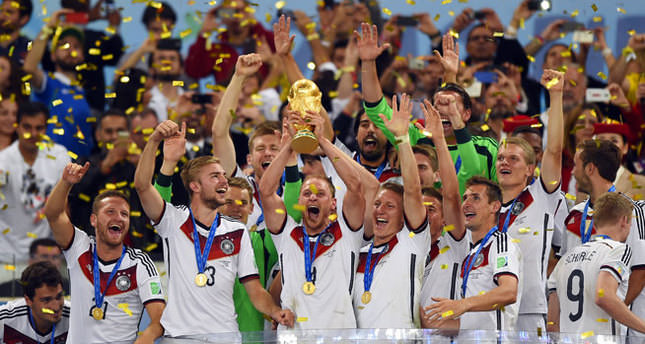 United they stand, right at the top of the football world and now Germany looks poised to dominate the next World Cup in 2018 and the Euros in 2016

This is a German generation that could dominate for the next decade or more. Granted, whenever the FIFA circus rolls into town every four years - consequently sucking the heart, soul, finances and social harmony out of its host - Germany is always there or thereabouts. As with Spain four years ago, Sunday night was a triumph of engineering, a blueprint for how a country bounces back after disappointment and chooses long-term success over short-term money. For Andres Iniesta's nerveless exhibitions of pure technique in Johannesburg, read Mario Gotze in Rio. Like Spain before them, nearly the entire squad is composed of players that have known nothing but a winning system. Fourteen years ago, Germany's creaking band of warhorses dropped out of Euro 2000 as arguably the worst team in the tournament, as well as the oldest, with the terrifying prospect that few quality players were coming through the ranks. A top-to-bottom overhaul by the German FA ensured that coaching as well as tactical and technical excellence was put at the top of the agenda in every youth academy in the country. Mario Gotze's stunning finish was a microcosm of the last 14 years; a perfectly balanced player superbly controlling a shot before rifling in a finish as if it were just a training ground maneuver. In the end, it was that quality and that vision that won the game.

Germany's World Cup victory on Sunday was not just down to 50 days of good preparation for the tournament but was the culmination of a meticulously-planned long-term project, coach Joachim Loew said. Both Gonzalo Higuain and Rodrigo Palacio - he of the appalling rat tail haircut where if you pull the string, he misses a sitter - had relatively routine chances to snatch the advantage and on both occasions their technique was wanting. Higuain's rushed finish from Toni Kroos' inexplicable backpass header would have been so much easier with a silky first touch before the finish. As it was, Higuain snatched at it, feebly scuffing it as if trying to hit a fly with a beach towel. In extra time Palacio was put through on goal only to dink it wide. For sure Manuel Neuer made it difficult but, as esteemed former World Cup golden boot winner Gary Lineker pointed out, in a World Cup you simply have to find a way to score that. Gotze's chance was arguably the most difficult of the game but taken with the consummate ease of a player fully in control of his facilities, and a man who will be in control of Germany's destiny in the future. For most of the game, Germany did have to resort to their more time honored playing style of having to gut out a testy game against a testy opposition.

Bastian Schweinsteiger was less fleet-footed, Uber-teknik but rather a throwback to the warrior footballing days, the time when well-timed challenges and old fashioned bloody mindedness were treasured above all else. And perhaps therein lies Germany's vindication and their strength. Ever since the 2010 edition of the Mannschaft rampaged through to the semifinals, stacking eight goals on England and Argentina, we have marveled at how refreshingly different this group were to the gritty and disciplined incarnations of the past. But this group - and Schweinsteiger in particular - have that grit and discipline, they just also have impeccable technique and tactical sophistication.

The committee meetings on the pitch before free kicks and the players' consultation with Jogi Low, points to a team that has the vital element of trust and respect. Bearing those qualities in mind, the only surprise is they didn't win it sooner. So systemized is their talent that Germany were able to cope with, not one but, two midfield injuries within the first half an hour without breaking stride. Young though this team is - and there are plenty more coming through, with Julian Draxler heading the new crop - they are battle hardened. Six of the starting lineup have won junior titles together with Germany while almost every player has played deep into World Cups and European Championships, not to mention success at club level. There is a huge amount corporate knowledge and shared experience in these ranks that should stay even once Schweinsteiger and Phillip Lahm hand over the leadership of the group to the next generation. For the last decade and a half, international football has gone in cycles. France were the undisputed masters of late and early 21st century football, an unbeatable colossus fuelled by the Clairefontaine academy and Zidane, before Spain grew into the greatest international team of all time, riding the back of Barcelona's La Masia conveyor belt, reinventing football along the way. With Spain in the rear view mirror, Germany look poised to dominate the next World Cup in 2018 and the Euros in 2016. Beyond that, we can't say. Mental and physical fatigue tend to win out after relentless success. Today, there is no one to take Germany's crown and no peer that can match their personnel output.