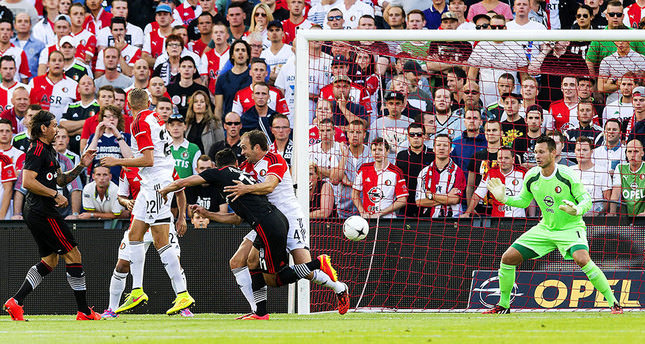 by AA Jul 31, 2014 12:00 am
Turkey's Beşiktaş won against Dutch club Feyenoord 2-1 in the first leg of UEFA Champions League qualifying round played at De Kuip Stadium, Rotterdam on Wednesday night.

Beşiktaş made a flying start at De Kuip Stadium in Rotterdam thanks to a headed goal from Mustafa Pektemek in the 13th minute.

The Turkish side doubled the score when midfielder Kerim Koyunlu dispossessed Feyenoord's Joris Mathijsen in the 71st minute.

In stoppage time, Beşiktaş' left-back Ramon Motta's tackle on Feyenoord's Elvis Manu saw the Dutch side awarded a penalty which was converted by Mitchell Te Vrede. The game ended in a 2-1 Turkish victory.

The return match will be played on August 6 in Istanbul.