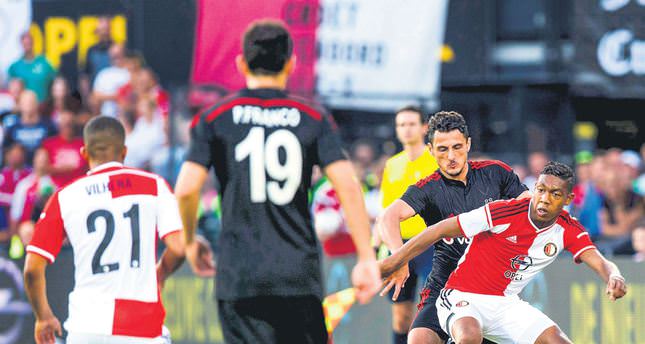 Goals from Mustafa Pektemek and Kerim Koyunlu edge Beşiktaş past last season's Eredivisie runners-up, who pulled one back late on

Beşiktaş won against Dutch club Feyenoord 2-1 in the first leg of UEFA Champions League third qualifying round played at De Kuip Stadium, Rotterdam on Wednesday night. Beşiktaş made a flying start at De Kuip Stadium in Rotterdam thanks to a headed goal from Mustafa Pektemek in the 13th minute. The Turkish side doubled the score when midfielder Kerim Koyunlu dispossessed Feyenoord's Joris Mathijsen in the 71st minute.

In stoppage time, Besiktas' left-back Ramon Motta's tackle on Feyenoord's Elvis Manu saw the Dutch side awarded a penalty which was converted by Mitchell Te Vrede. The return match will be played on August 6 in Istanbul. Beşiktaş took control of the match early on, breaking the deadlock when Turkish international Pektemek met a deep Oğuzhan Özyakup corner with an emphatic header. Beşiktaş could have doubled their advantage just six minutes later when Özyakup played another fantastic ball into the box only to see the chance go begging. Slaven Bilic's men eventually found a second after a mistake by Joris Mathijsen gifted the 20-year-old Koyunlu the chance to make it two. Te Vrede restored some Dutch pride by tucking in his spotkick deep into added time after second-half substitute Motta felled Elvis Manu in the box. Beşiktaş, who finished third in the 2013/14 Turkish Super League season behind champions Fenerbahçe and second-placed Galatasaray, will relish the chance to edge closer to the group stage in front of their home crowd when they host the second-leg in Istanbul next week.

Separately, the Azerbaijani champions Qarabağ shocked Austrian side Salzburg. despite going down to nine men. Both sides had already been reduced to ten men during a tempestuous first half, when Salzburg captain Jonatan Soriano cancelled out Danilo Dias' opener. Reynaldo then struck his second in as many games four minutes from the final whistle to clinch victory.

There was still time for the Brazilian midfielder to earn a straight red card, however, as a dramatic match took another twist. Danilo Dias gave the hosts the perfect start, scoring after two minutes as the Azerbaijani side began on the front foot.

Former BSC Young Boys defender Christian Schwegler was then sent off for an over-zealous challenge as the away side found themselves a goal and a man down after just 34 minutes. The Austrian title holders were given a glimmer of hope just eight minutes later. Qarabağ captain Admir Teli received his marching orders after two bookings in the space of two minutes as the home side lost their numerical advantage. Soriano hauled his side level, but Salzburg failed to find the net again despite their Spanish star striker rattling the bar after an error by Qarabağ goalkeeper Ibrahim Sehic. Reynaldo pounced on a cross by substitute Ilgar Gurbanov to restore Qarabağ's advantage, before the hero turned villain at the death.

Qarabağ defend their slim lead in Salzburg next Wednesday. And, AEL Limassol FC kept alive their dream of a UEFA Champions League group stage place courtesy of a 1-0 victory against ten-man FC Zenit in the first leg of their third qualifying round tie. Although Zenit, who had Axel Witsel sent off on 67 minutes, enjoyed the majority of possession, they ultimately paid the price for not converting their chances. In the other important match of Wednesday night, Legia Warszawa missed two penalties but still overwhelmed a tenman Celtic FC 4-1. The Hoops drew first blood in the contest through Callum McGregor, but Miroslav Radovic's double and an Efe Ambrose red card had Ronny Deila's side reeling at halftime.

Any relief Celtic felt at seeing Ivica Vrdoljak miss a penalty on the hour mark was extinguished by late goals for Michal Zyro and Jakub Kosecki, which sandwiched another squandered Vrdoljak spot kick in a manic finish. Radovic turned provider for Zyro's 84th-minute header, before Lukasz Broz played in Kosecki to giftwrap the win and give Legia a three-goal advantage to defend in Scotland next Wednesday.
Last Update: Aug 01, 2014 2:02 am
RELATED TOPICS