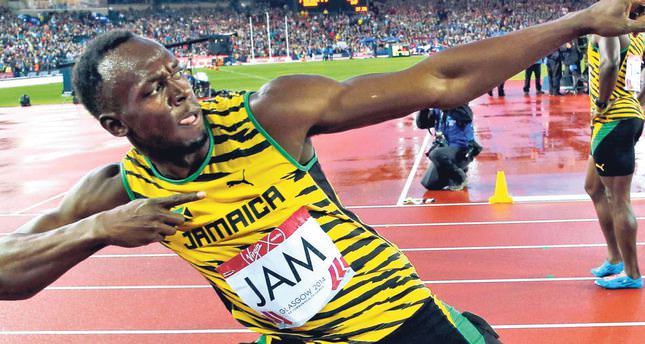 The Commonwealth Games end with England assured the top spot for the first time since 1986 as Jamaica's Usain Bolt added Commonwealth gold to his medal collection, winning the 4x100m relay

Superstar sprinter Usain Bolt anchored the Jamaican team to victory in the Commonwealth Games men's 4x100m relay on Saturday as England topped the medals table for the first time in 28 years.

In a fitting end to the track and field program at Hampden Park, Jason Livermore, 100m gold medalist Kemar Bailey-Cole and bronze medalist Nickel Ashmeade all safely negotiated their legs before the baton was passed on to the towering figure of Bolt. The 27-year-old, who has won six Olympic gold medals and eight world titles but was making his Commonwealth Games debut, made no mistakes in his anchor run in light drizzle on a soaked track, charging through the line in a Commonwealth Games record of 37.58 seconds. "It means a lot. Commonwealth gold is the only medal missing from my collection," said Bolt, who did not race the 100 or 200m events after a nagging foot injury forced him out of the Jamaican national championships, which served as a trial for these games.

"I'm happy to be here and sorry I didn't manage to run the individual events because the energy out here is wonderful." In the women's 4x100m relay, Jamaica was also triumphant courtesy of Kerron Stewart, Veronica Campbell-Brown, Schillonie Calvert and double Olympic 100m champion Shelly-Ann Fraser-Pryce. Kenya's middle- and long-distance team continued their amazing form. Mercy Cherono and Janet Kisa won gold and silver in the women's 5,000m, with the bronze going to England's 40-yearold Jo Pavey. Cherono and Kisa's double feat was then replicated in the men's 1,500m by James Magut and Ronald Kwemoi. Magut's gold was the men's third after those in the 5,000m and 3,000m steeplechase. Kenyan Julius Yego then claimed victory in the men's javelin. With just one day left at the games, England is ahead in the medal-count with 165, of which 56 are gold, while Australia has 132 in total with 45 gold.

Only 11 titles are left to be decided on Sunday leaving England to nudge Australia off the top of the medals table for the first time since 1986 in Edinburgh. The Commonwealth Games, however, were rocked Saturday when it was announced that former women's 400m world champion Amantle Montsho had failed a drugs test. The Botswanan, who won the world title in 2011, tested positive for the banned stimulant methylhexaneamine after the final of the 400 meters. On Friday, Nigerian teenage weightlifter Chika Amalaha was stripped of her women's 53kg gold medal after failing a drugs test. England's boxing team brought home a glut of five golds from 13 finals thanks to Nicola Adams, Joseph Joyce, Savannah Marshall, Scott Fitzgerald and team captain Antony Fowler.

The volleyball team went down 35-34 to New Zealand with Marai Tutaia sinking the winner in the final two seconds as the defending champion Silver Fearns booked a Sunday final against top-ranked Australia, who defeated Jamaica. Australia comfortably saw off England 4-1 in the men's hockey semis and will face India, who came back from 2-0 to defeat New Zealand 3-2, for their fifth consecutive gold. Joshana Chinappa and Dipika Pallikal ensured India's maiden Commonwealth Games squash medal was gold as they shocked top seeds Laura Massaro and Jenny Duncalf of England with an 11-6, 11-8 win in the women's doubles final. Singapore finished with six table tennis golds out of a possible seven after Zhan Jian won the men's singles and Feng Tianwei secured her third gold in the Commonwealth Games with Yu Mengyu in the women's doubles.
Last Update: Aug 04, 2014 2:03 am
RELATED TOPICS