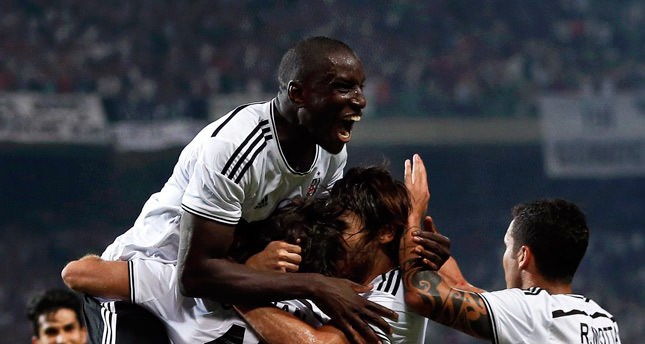 Turkish team will face Arsenal for a place in the Champions League group stage. Celtic earn play-off reprieve as Legia kicked out

Beşiktaş have been given the most difficult route to the UEFA Champions League after they drew Arsenal in the playoff. The Turkish team showed off their potential in the previous round by beating Feyenoord home and away with a hat-trick from new signing Demba Ba wrapping up a 5-2 aggregate victory with a 3-1 win in Istanbul.

Beşiktaş and Arsenal play the first leg of the clash on the 19/20 of August, with the return leg the week after on the 26/27. Manager Arsene Wenger has an excellent record of guiding his team into Europe's elite club competition, and despite the fact Germany's World Cup winning trio Per Mertesacker, Mesut Özil and Lukas Podolski won't be fit in the time to play, he'll be confident of victory. "What a draw! Already looking forward to the matches against Beşiktaş," tweeted Arsenal's Turkish footballer Mesut Özil. Arsenal, known as "The Gunners," will be encouraged by how easily they disposed of fellow Turkish outfit Fenerbahce (5-0 on aggregate) at the same stage last season. "It's nice we have got the second leg at home," Arsenal club secretary David Miles said. "They (the playoff ties) come relatively early in the season, and our three German World Cup winners won't even be back, or will be just starting training then, so probably we won't have the full squad to choose from. Nevertheless, we've got a good squad, quality in depth and I'm sure will be okay."

The other ties in this section are Standard Liege v Zenit St. Petersburg, Napoli v Athletic Bilbao and Copenhagen v Bayer Leverkusen. "You have to take it as it comes," Leverkusen coach Roger Schmidt told the club homepage. "It is now up to us to give everything to come out successful from the two games. Of course home advantage in the return leg is a help." In the champions path, 1986 European Cup winners Steaua Bucharest were paired with Ludogorets Razgrad while 1967 champions Celtic were drawn against Maribor. Celtic were a late entry to the draw having been defeated 6-1 on aggregate by Legia Warsaw in the third-qualifying round only to be given a reprieve due to the Poles fielding an ineligible player in the second leg of the tie.

Earlier Friday UEFA overturned the 0-2 result in that match to a 3-0 win for Celtic which meant they progressed on away goals. Legia have said they intend to appeal the decision. "The UEFA Control, Ethics and Disciplinary Body have announced that Legia have been sanctioned for fielding an ineligible player in their second leg against Celtic," a UEFA statement announced. The statement continued: "The match has been declared as forfeit and Legia have lost the match 3-0. "As a consequence, Celtic have qualified for the play-offs on away goals (agg: 4-4) and Legia will compete in the UEFA Europa League play-offs." Legia have five days in which to lodge an appeal. Celtic coach Ronny Deila, reacting to Celtic's dramatic reinstatement at the club's Lennoxtown training complex said: "It is very strange, I have to say that. "First of all I feel very sorry for Legia, and my friends from Norway there (Legia are managed by Deila's fellow Norwegian Henning Berg). "It is tough to think of that and now we are in the Champions League," he said. "That is what UEFA said, we haven't been involved in anything. "I am a football manager and I have to go with it and now we are preparing for Maribor."

The Polish club, who have asked UEFA for a full transcript of the verdict, were sanctioned over Bartosz Bereszynski. Bereszynski, who only played four minutes at the end of Wednesday's second leg tie at Murrayfield, was sent off in Legia's concluding Europa League match last season. He was suspended for violent conduct for the club's two matches against Ireland's St Patrick's in the second qualifying round and also missed the 4-1 first-leg victory over Celtic last week. But it then emerged that Bereszynski had not been registered in Legia's squad for the second qualifying round, and so the matches did not count towards his suspension. He has been handed a further one-match suspension.

This is not the first time Celtic have benefited from a UEFA inquiry, as they took their place in the Europa League group stages despite a qualifying defeat by FC Sion after the Swiss club were ruled out for fielding five ineligible players. Aalborg face Apoel, Salzburg take on Malmo and Slovan Bratislava meet BATE Borisov in the other games. The winners of the play-off matches, held on August 19-20 and 26-27, will join 22 clubs who have already qualified for the group phase.