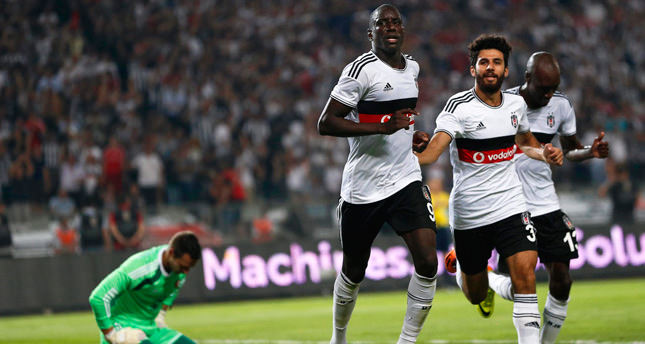 New signing Demba Ba hit a hat-trick as Beşiktaş defeated the Netherlands' Feyenoord 3-1 in the second leg of the UEFA Champions League Third qualifying round, qualifying for playoff round 5-2 on aggregate at the Atatürk Olympic Stadium in Istanbul on Wednesday.

The Senegalese striker's hat-trick came in just his first game. The last time Ba scored a hat-trick was in the 2010-2011 Premier League season. Wearing Newcastle United jersey, Demba Ba scored three goals against Stoke City in a 3-1 win. Beşiktaş's new arrival, who was assisted by his teammate Mustafa Pektemek, dribbling nearly through a crowd of players to score his first goal for his new club in the 28th minute. In the second half, Dutch side Feyenoord began to push forward and, in the 73rd minute, they were rewarded with a goal from Dutch winger Elvis Manu. Beşiktaş managed to take the lead once again when Ba tapping the ball into the net in the 80th minute. Besiktaş's Turkish midfielder Olcay Şahan dribbled towards the byline and crossed to Ba, allowing the Senegalese international to finish easily, making the score 2-1. Feyenoord could not withstand the pressure, and the unstoppable Beşiktaş increased the gap when Ba scored in the 86th minute.

The former Chelsea striker took advantage of a Feyenoord defender's mistake, and the red hot Senegalese star dribbled into the box and grabbed his hat-trick with a calm finish, 3-1. Having won the first leg 2-1 in Rotterdam last week, Beşiktaş - aka the "Black Eagles" knocked Feyenoord out of the tournament with the victory. Draws for the playoffs in the UEFA Champions League will be made today at UEFA headquarters with Turkish club Beşiktaş's possibly facing Arsenal (England), Porto (Portugal), Zenit (Russia), Bayer Leverkusen (Germany) or Napoli (Italy). First leg matches will be played between 19-20 August whilst the second legs will be held between 26-27 August.

Beşiktaş, who finished third in the Turkish Super League last season, only qualified for the Champions League because champions Fenerbahçe are serving the second of a two-year ban over domestic match-fixing in 2011. Elsewhere, Celtic were humiliated 6-1 on aggregate by Legia Warsaw on Wednesday. Ludogorets Razgrad went through on away goals after a dramatic 2-2 draw at 10-man Partizan Belgrade and Zenit St Petersburg scored three second-half goals to end a brave challenge from AEL Limassol Scotland's Celtic, who reached the last 16 two seasons ago and beat Barcelona on the way, were humbled 6-1 on aggregate by Legia Warsaw after losing the second leg 2-0 at home. Michal Zyro and Michal Kucharczyk scored in each half to take the Polish champions within two games of their first group stage appearance since 1995-96. Moldova, Azerbaijan and Kazakhstan's hopes of being represented in the group stage for the first time ended as their champions were all eliminated. Azerbaijan's Qarabag Agdam took a 2-1 lead to Salzburg, only to be sunk by two-first half goals from Martin Hinteregger as they lost 2-0 to the Austrians in the third qualifying round, secondleg tie. Moldova's Sheriff Tiraspol lost 2-1 on aggregate to Slovan Bratislava after a goalless draw at home to the Slovakians and Kazakhstan's Aktobe were beaten 2-1 at former champions Steaua Bucharest, going out 4-3 on aggregate.

Cypriot league runners-up AEL, who took a 1-0 lead to Russia, had Danielzinho sent off in the 27th minute but held out until 10 minutes into the second half when Venezuelan Jose Rondon headed in for Zenit. The Russians avoided extra time when Danny and Aleksandr Kerzhakov, from a penalty, scored in the last three minutes to give them a 3-1 aggregate win. Cypriot champions APOEL Nicosia qualified, however, when Cillian Sheridan and Tomas De Vincenti's penalty gave them a 2-0 win over HJK Helsinki for a 4-2 aggregate win. Bulgarian champions Ludogorets, under new coach Georgi Dermendzhiev, knocked out Partizan for the second season running.

Brazilian Marcelinho gave them a 2-0 lead with a quickfire brace midway through the first half, only for Partizan to hit back with a Petar Skuletic double in the space of five minutes. The Serbs lost momentum, however, after their centre back Branislav Trajkovic was shown a red card for slapping an opponent in the face shortly before halftime.

Danish champions Aalborg BK stunned Dinamo Zagreb when Anders Jacosben scored twice, the second a thunderbolt from the edge of the penalty area, to give them a 2-0 away win to overturn the Croatians' 1-0 opening victory. Other teams to qualify were FC Copenhagen, who beat Dnipro Dnipropetrovsk 2-0 after a goalless draw in the first leg, and 1979 runners-up Malmo, who qualified on away goals after beating Sparta Prague 2-0 for a 4-4 aggregate draw. Napoli, Porto, Athletic Bilbao, Bayer Leverkusen and Arsenal enter the fray in the final qualifying round with the draw at UEFA headquarters in Nyon on Friday.