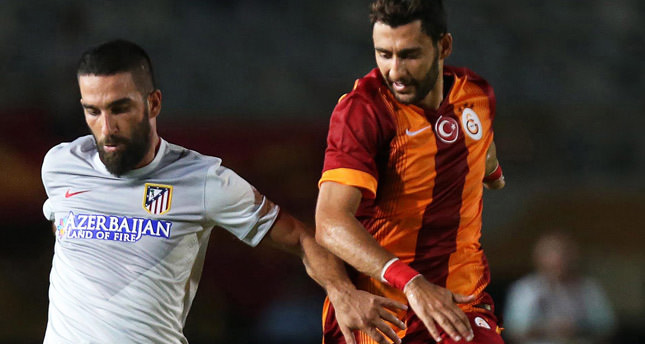 by Daily Sabah with Agencies Aug 08, 2014 12:00 am
Galatasaray and Atletico Madrid played out an underwhelming goalless draw on Wednesday in İzmir for the families of the Soma mine victims. Both sides had their chances in the LFP World Challenge clash, but neither were able to break the deadlock as their preparations for the new season continued. The likes of Mario Mandzukic, Koke and Arda Turan featured for the Spanish champions, while Alex Telles and Burak Yılmaz were among the starters for Cesare Prandelli's side. After a first half of limited opportunities, Turan thought he had opened the scoring early in the second half only for his header to be adjudged offside. Diego Godin went close with a header that was well saved by Fernando Muslera, but a goal was not forthcoming in a disappointing encounter.

There were few chances in the opening exchanges, but Telles came close to opening the scoring 18 minutes in when his cross from the left almost caught out Miguel Moya in the Atletico goal. Gala were then aggrieved when Olcan Adın's appeals for a penalty were waved away after he went down following minimal contact with Godin on the edge of the area. Turan had the ball in the net soon after, only for the referee's assistant to deem him offside before Fernando Muslera tipped Godin's header over the crossbar. Chances dried up late in the game, with both sides' forays forward swiftly dealt with by their opposing defences and Yilmaz heading wide in the latter stages represents Galatasaray's best chance to snatch a win.
Last Update: Aug 08, 2014 1:42 am
RELATED TOPICS