Beşiktaş can win in London - Biliç 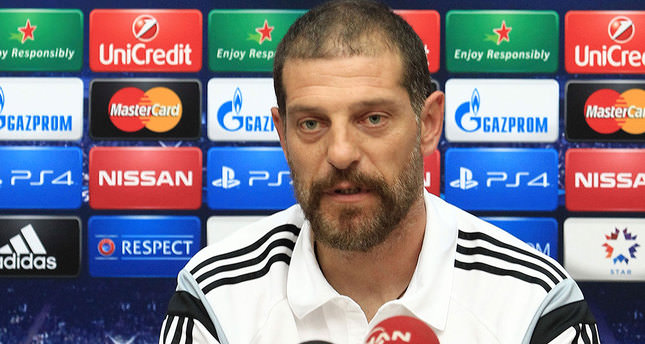 Despite a frustrating 0-0 draw with English giants Arsenal in the first leg of the Champions League, Beşiktaş manager Slavan Bilic insists his team have more than a chance when they return to London next week.

The Croatian coach was sent to the stands later on for remonstrating with the referee while Arsenal finished with 10 men after Aaron Ramsey was shown the red card for two bookable offences.

Despite the scoreline, Beşiktaş could have scored a handful with Demba Ba missing the chance of the game just before half time having hit the crossbar with a stunning drive from the kick off just seconds into the game.

Olcay Sahan, who struggled against French international Mathieu Debuchy all game, also missed a guilt-edged chance when he, like Ba, turned inside his defender before firing wide.

England international Alex Oxlade-Chamberlain hit the woodwork in the final minute to register Arsenal's only real threat on goal.

Admittedly unhappy with the scoreline, Bilic believes the tie is far from over while bemoaning his side's inability to finish its chances. "Arsenal had their chances. They create them against whoever they play, but we were closer to beating them," said Bilic. "We had clearer chances. But, simply, if you want to beat Arsenal you have to score from one of those chances. Nobody respects Arsenal more than I do, but I wouldn't have taken this result before the game. I was really hoping to win this game."

"We're going to London not to go shopping at Harrods, but to try to fulfil, some would say, our dream. I'd say our task, our plan."

Football is all about taking your chances, and the Champions League tends not to give second opportunities.

Hosting one of the Premier League and Europe's most decorated and storied clubs, Beşiktaş's 0-0 draw with Arsenal was about as impressive a performance as you could hope to expect, particularly for a team who only reached this far on a technicality – thanks to Fenerbahçe's match-fixing scandal. But good showings and game performances don't mean anything in the Champions League if you don't take your chances. And that is why Beşiktaş is likely to play its last game of the competition in a week's time.

Harsh though that sounds, Beşiktaş can come away very happy with how they performed. Not only could they have beaten one of the top sides in Europe, they could have beaten them convincingly. For all of Arsenal's passing and precision, only Alex Oxlade-Chamberlain in the final minute managed to cause any trouble to Tolga Zengin's goal, while Demba Ba alone had enough chances to give Beşiktaş a chance back in London.

The Senegalese's stunning shot direct from the kick off, that cannoned off the bar, was so incongruous and audacious that much of the 41,000 fans in attendance barely noticed that their season nearly began with one of the competition's greatest ever goals.

Beşiktaş would finish the game with the better possession percentage and better chances, but not the better chance to qualify. More worryingly, Arsenal were clearly not at their best. Pedro Franco and Ersan Gulum were again impressive in central defense, thwarting a number of attacks before they reached the goal. But Arsenal's easy incisions through midfield will be troubling. Before being substituted in the second half, Alexis Sanchez had ran Beşiktaş ragged. The Chilean's speed, directness and technique immediately but the Turkish side on the back foot the moment the ball touched his foot. Ramsey, before being sent off, was a menacing force from deep with his perfectly timed runs while Jack Wilshere was imperious in possession at all times.

Football is all about chances, and Beşiktaş need to take theirs when they go to Emirates Stadium next week. There was enough evidence from Oguzhan Ozyakup, Ba and Mustafa Pektemek that Beşiktaş can trouble Arsenal and maybe grab a goal. But stopping Arsenal, who have made every Champions League group stage for nearly two decades, will be a tall order.